Recently I had an interview with singer and multi instrumentalist Neal Morse. His career started in pubs, as singer-songwriter. Early ‘90’s he founded the prog band Spock’s Beard. That was the start of a successful career. He also has success with prog super group Transatlantic, and the prog band Flying Colors. Last but not least, his solo career with his own band The Neal Morse band is doing very well.

The Similitude of a Dream

The upcoming album of the Neal Morse band, ‘The Similitude of a Dream’, will be released on November 11th, on Radiant Records. This is the eighth studio album with Neal Morse, drummer Mike Portnoy and bassist Randy George. And the second one for guitarist Eric Gillette and keyboardist Bill Hubauer. ‘The Similitude of a Dream’ is a concept album based on the book ‘The Pilgrim’s Progress’ by John Bunyan. The book is published in 1678, and chronicles the spiritual journey of a man from the City of Destruction to the place of deliverance.

Neal is very grateful for the fact that the Lord is giving him so much inspiration. He loves to wake up being inspired immediately. Heading to the studio and write. Last December he was in the studio writing songs. Then it popped into his mind that somebody sent him an e-mail a while ago. That guy mentioned the book ‘The Pilgrim’s Progress’ for an concept album. Neal doesn’t have the book, so he had to google. The fist writing session was in January. Mike couldn’t be there. Neal was not sure the band wanted to do this. They wrote and sketched some stuff. Before they knew, they already sketched first half of disc one. In February Neal wrote some songs on his own, like ‘Breath of Angels’. They were still not sure about a second disc because Neal wasn’t hooked on a double album. The writing during this process was an adventure. This concept album tells a story, therefore it’s lyrically driven. The main idea was there, they had the chorus lines. The details came in later. Concept albums are a lot of work, although “The Similitude of a Dream’ was not so hard as some others. It came in a kind of flow, and they all agreed the way it is. It’s a different kind of concept, and when Neal was in it, he really enjoyed. This album is sometimes directly based, sometimes loosely based on the Pilgrims book.

They were following the main character at his journey, meeting different characters, encounter people. The guy had a battle with a monster. They tried to capture the guy and the other characters: how it felt like living in the ‘City of Destruction’. The guy made the decision to leave his family and live a life of his own. That’s why they wrote these words:

“My life is a shadow
At home I’m a stranger”

in the track called ‘Long Day/Overture’. Chris Carmichael played the strings for this track. Neal marked up some stuff on keyboard and Chris made his own arrangements. Chris and Neal have been working together more often, for example at Neal’s latest album, The Grand Experiment.
By the time the band had 45 minutes of music, they had only written lyrics and music about the first eight of nine pages of the book. Then they decided to make two discs, filled with more than 100 minutes of music.

‘The similitude of a dream’ is available in 3 formats
1. Special Edition 3 Disc Digipack (2CDs and “The Making of a Dream” DVD)
2.  LP Vinyl with 3 LPS & 2 CDs included in the package
3. 2 CD regular version.
Only the special edition has an embossed cover. This cover print is really special and amazing. The cover (for all the formats) is made by Carl Glover.
The inside paintings are made by Paul Whitehead (Genesis and Van der Graaf covers)

Neal is very gratified with his band. Neal says “Eric and Bill are amazing players. They all are great writers. Their voices are blending very well together. We have a special band, we are a special blending of people”. Neal and me also spoke about his other bands. He told me:
“Transatlantic is a mixing of elements, it’s a blessing to me to be a part of it. That’s also for the time I was part of Spock’s Beard. And Flying Colors is an amazing cattle of fish”.

The most recent Flying Colors album, ‘Second Nature’, was released about two years ago. So I asked Neal about plans for a new Flying Colors studio album. There are not yet tight plans. Although Flying Colors are going to write in December. Than they’ll see what happens. Because of all their busy schedules it might take a year before they can write again. 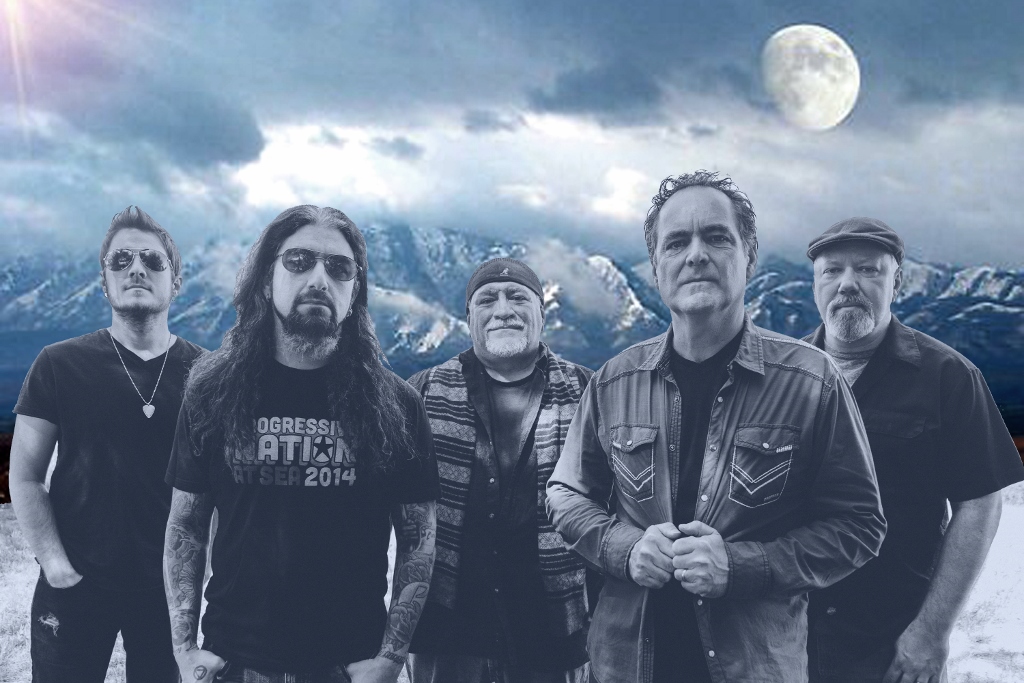 If Neal has time he reads reviews. Some of them are very interesting. He loves to read what people are thinking. He likes to “hear” their thoughts about the albums and concerts. He also loves to talk to new people, during interviews etcetera. Before a gig The Neal Morse band are talking, praying and getting ready. Neal says about live shows: “It’s a fun thing for the audience switches of instruments. These guys are so crazy good with al those instruments”

After a gig they sometimes hang around with friends, although, from time to time, it’s quiet as well. Performing gives them energy. Now and then they’re knackered after a gig. It depends on how much they have been travelling. Sometimes they hang around in the tour bus and sing songs, and having a great time together.

‘I am willing’ from the album Testimony (2003) is Neal’s favourite short song he ever wrote. His favourite long one is ‘Stranger in your soul’ a half hour track from Transatlantic (Bridge Across Forever 2001) Music in Neal’s genes. Not only his brother Alan (Spock’s Beard) is a musician. Their uncle Rob (Robert) was a jazz vocalist, late ‘50’s- early ‘60’s. Their father was a choir conductor and a music teacher. With Alan, Neal formed the prog rock band Spock’s Beard in 1992. It wasn’t an easy decision to leave Spock’s Beard ten years later, not at all. Neal explains: “It took me about nine months of prayer. I was upset, had troubles with functioning. Some days were better than others, but it was a hard time for me. This difficult period of time gave me later the inspiration to write ‘The Crossroads’. It describes exactly the way how I felt”. Neal is a multi instrumentalist, his favourite instrument to play is a grand piano in a nice room. He would love to learn how to play a (pedal) steel guitar.

Neal is a buzzy bee. When he’s not making/writing music he likes to do church related activities and charity. Neal would love to do more volunteering, due time reasons it’s not possible to do more. Although he has a mission down town, feeding people who need help. The environment is important to Neal, so he also helps to clean up the ocean. He also likes physical activities like playing tennis, walks, and skiing. Playing cards with his kids is a favourite way of having family time. Of course to chill out at vacations at cool places is very welcome as well.

The Neal Morse band planned a ‘The Similitude of a Dream’ tour trough US and Europe for early 2017. For more info: http://www.nealmorseband.com/live.asp

Thank you Mr Neal Morse for the time you took for this interview, much appreciated.
I also would like to thank team RockMuZine and PIMP = Professional Independent Music Promotion for making the interview possible!