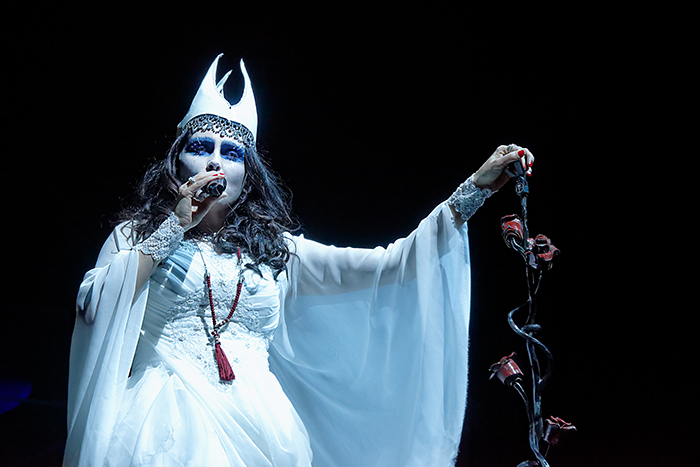 Last year the famous Dutch (hard)rock band Within Temptation for the first time announced a Christmas Extravaganza show, named the Black Xmas show. The first evening sold out quickly with a second evening as result. The event was a great success to which band and fans have a lot of fun. 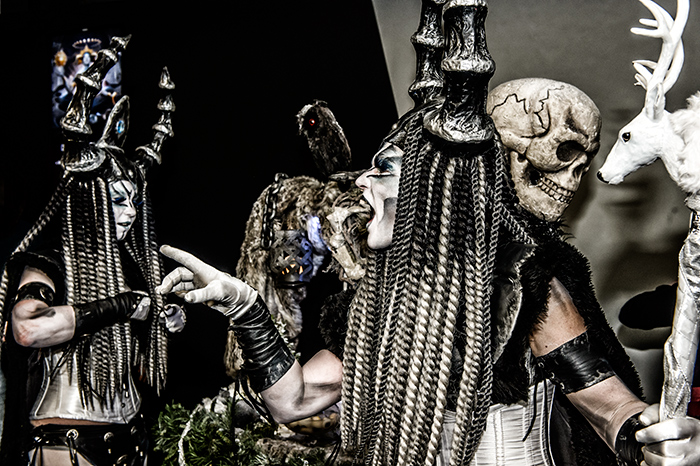 At the moment Within Temptation announced the 2016 version of a Black Xmas in the middle of this year both shows sold out in a wink. It remarks the popularity of the band and the event they have created. Thursday the 22nd of December of this year is the first night and the second night is on the 23rd of december. In the alley – in front of the entrance of the 013 venue – the audience had a warm welcome from a kind of Mad Max fire artists. Inside the 013 venue various scary winter horror monsters are hanging around to create a winter horror atmosphere. You are only safe when entering the concert hall. Before the concert begins man feels and sees that this is a very special evening. 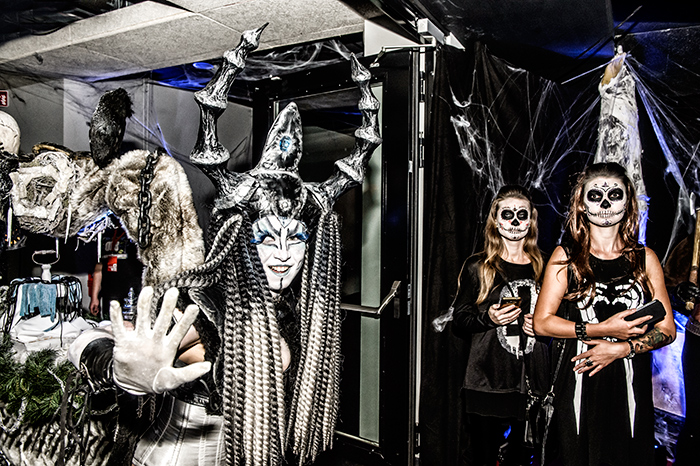 After the lights went out a few minutes after 9 pm, an opening film is screened. During this ‘Creepy Christmas film’ the bandmembers – dressed in the style of King Winter – entered the stage to say “Hello” to the (International) audience. Black Xmas Ice Queen Sharon den Adel is entirely dressed up in white and at the moment she enters the stage the band starts with ‘Black No. 1’ by Type o Negative. A surprising and strong opening which fits excellent in the Within Temptation style and the voice of Sharon. It’s the first surprise we get, because they never play this song live before. Sharon’s voice is excellent and the band is as sharp as they were at the end of the festivalseason in early September this year. 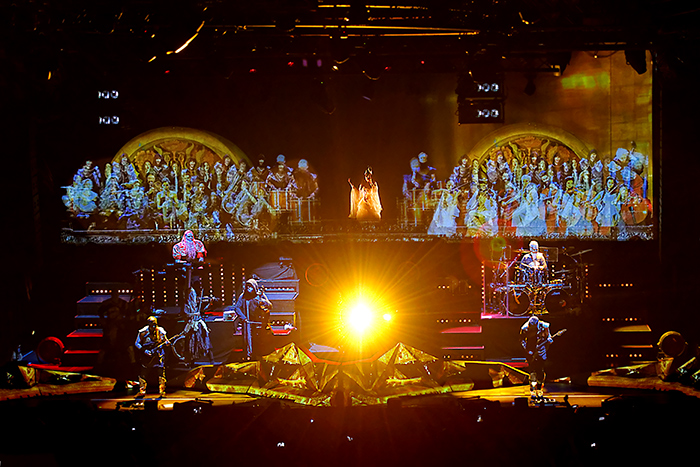 Not yet recovered from this surprising opening they start directly with ‘In the Middle of the Night’ of the ‘Unforgiven’ album. During ‘Jillian’ the audience can relax a bit. Wintersong ‘Frozen’ is next and this song is normally not on the regular setlist. The sound is great and because the band is assisted by an extra drummer, a cellist and a violinist the sound is even bigger normally. 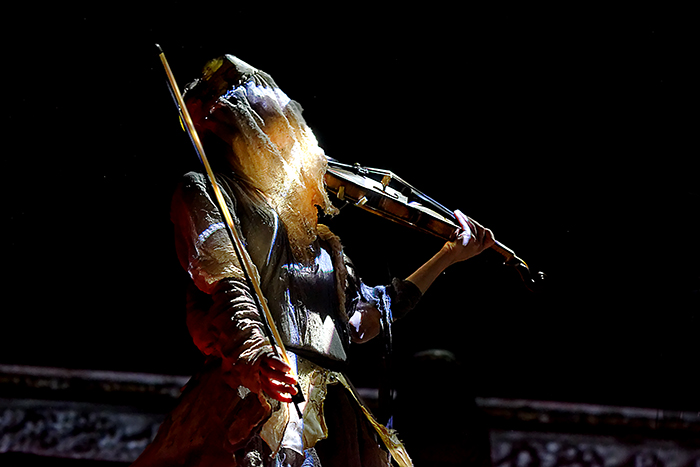 After ‘Stand my Ground’ the audience gets get three covers in a row. First one is ‘Run up that Hill’, to honor Kate Bush, who is a big inspiration for Sharon. Another cover which Within Temptation performs perfectly and sublime. ‘Black Sabbath’ of the orchestra with the same name gets a Within Temptation treatment. The vocal lines are beautiful but the doomy bass and heavy massive Iommi guitar riffs are missing. Alice Cooper’s ‘Poison’ is next, another song they have never played before ever. The audience is loving it, but musically they play it a little bit to sweet. 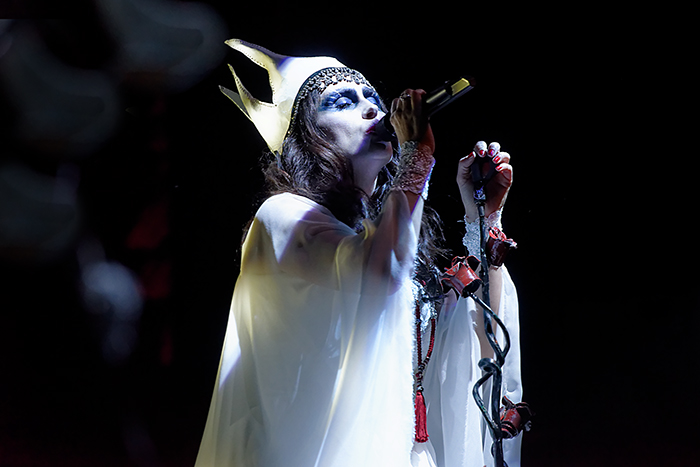 On evenings like these we fortunately see the musical father of Within Temptation on stage again. Robert Westerholt roars the grunts during the classic song of the past ‘The Other Half (of me)’. After the song it goes into a rollercoaster towards the last song of the regular set: ‘Mother Earth’. 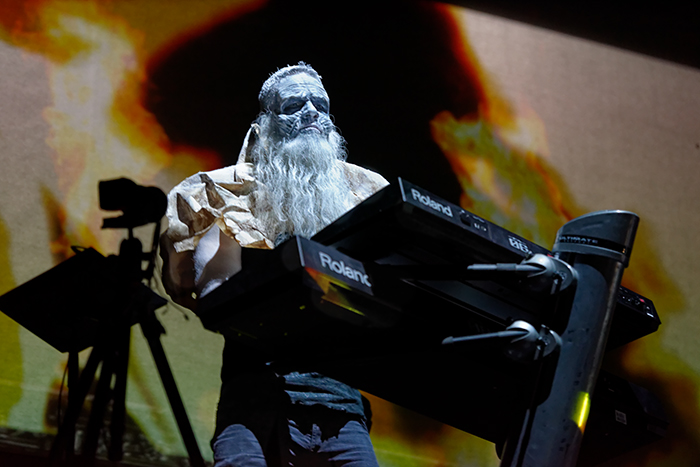 The first song of the encore is ‘All I Need’. The lyrics of ‘The power of Love’ by Frankie goes to Hollywood are according to Sharon the best lyrics ever. A song she wishes to have written these herself. With ‘Ghostbusters’ by Ray Parker Jr., we get the latest Christmas surprise. It is an equally surprising as logical choice on this Black Xmas party. Within Temptation has to play their biggest hit ‘Ice Queen’ anytime, anywhere, anyplace and it’s also a highlight tonight. The evening ends with ‘Gothic Christmas’, after which everyone will go home, more than satisfied. 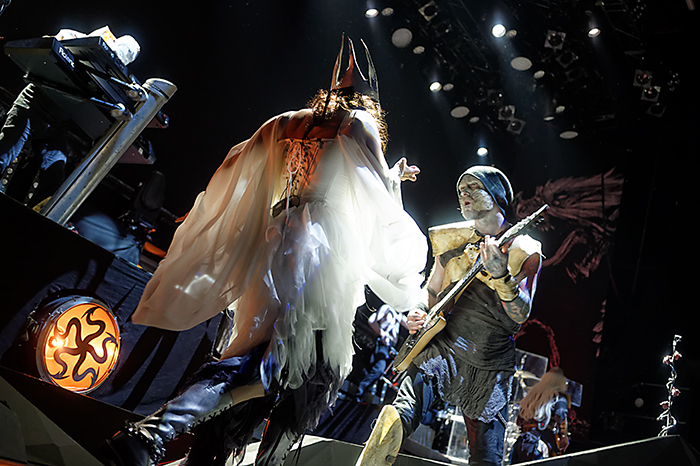 The regular Within Temptation set has a frame of the successful latest albums and some old stuff, mixed together with a coversong. At Black Xmas we get six cover songs the band normally never plays or haven’t play in at least the last 8 years, as well an anthology of their rich ouvre. A special set for a special night. The beautifully decorated stage with the well known videoscreen in the back is visually added with beamers which project graphics on ornaments. With six bandmembers and three additional musicians the stage is packed. The light is attractive but sober. A little bit more light would be welcome because the guitarists are standing in the dark once in a while. 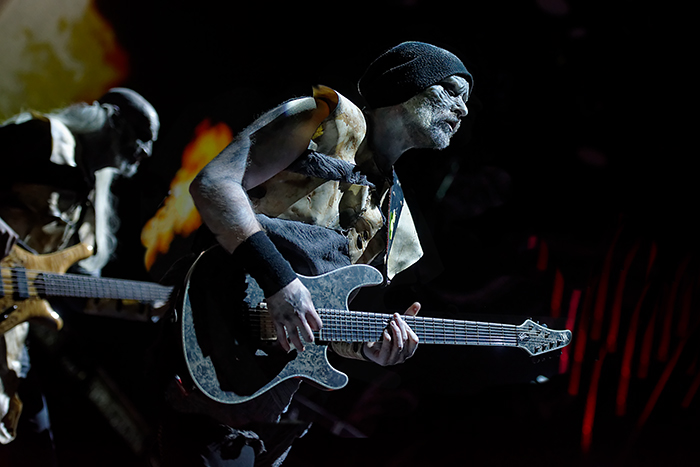 A Christmas rockcircus named Trans-Siberian Orchestra is touring with two simultaneously bands along the East and Westside of the USA since 1996. Why not start a Within Temptation Black Xmas European winter tour? Imagine this spectacle onstage in a beautiful venue in Vienna… a tour ending traditionally in Netherlands. 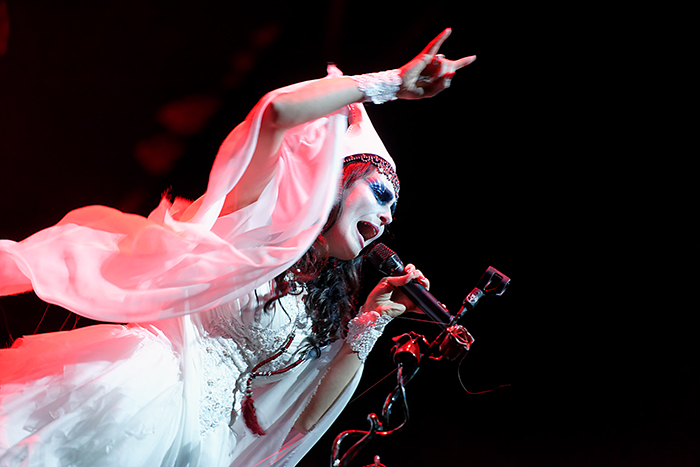