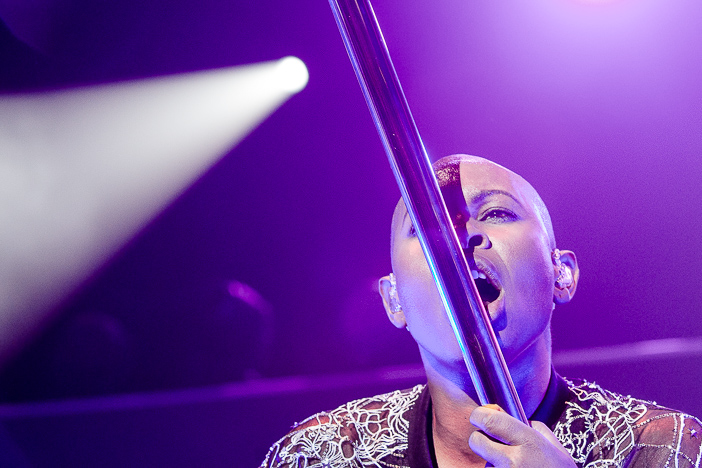 Thursday night Skunk Anansie took to the stage at AFAS Live, Amsterdam. They played a show that lasted more than two hours that blew away the audience, although in a different way than expected. Support provided by The Pearl Harts. 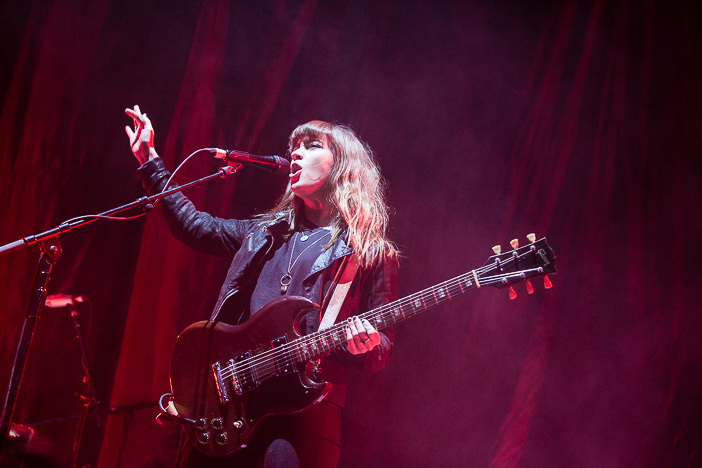 The show opened full of grandeur: bright white searchlights moved over the audience, a drum and bass into filled the hall, and the stage remained blocked from view by a huge black curtain. The band starts to play ‘Here I Stand’ and the curtain drops on the first sound of the drums. The band was dressed all in black and played black instruments, with lead singer Skin as the only exception, donning a sheer tracksuit with white graphics. The entire band is backlit by huge LED screens set up at the back of the stage, lighting the band and concert hall with visual, bright colour-blocks and video fragments. Halfway through the show, during ‘Love Someone Else’, the LED screens were accompanied by an additional wall of red laser beams, broken only by Skin’s movements and reflected in her silver jacket. 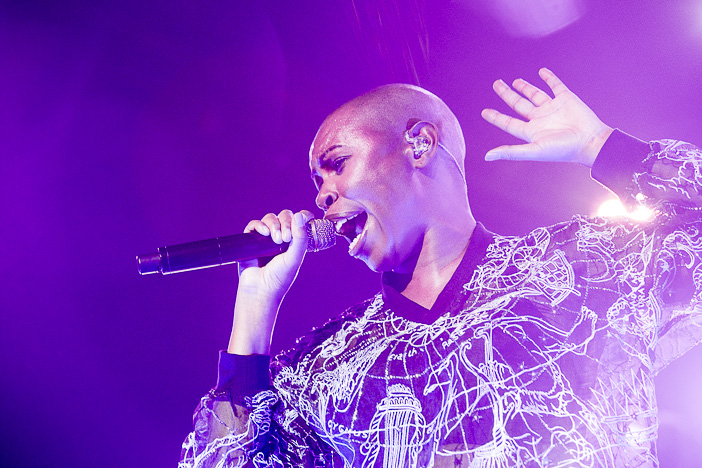 Instantaneously, the energy is right up there and the band keeps up the pace. During the fourth song ‘I Will Break You’, backing vocalist and all round additional band member Ellie Fagg is brought forward to share the spotlight with lead vocalist Skin. Skin’s voice is one that can intimidate many and most singers, but Ellie stood her ground and was able to match Skin both in vocal skill and energy, without overshadowing her. The two vocalists danced around and over each other in a sensual duet in which Ellie’s voice and energy perfectly complimented Skin’s. They followed up the song with a well-deserved step back with their brand new song Death to the Lovers off their latest album ‘Anarchytecture’. Although the tempo was taken down a notch, the show kept the energy levels up as enormous seas of fire danced across the LED screens. 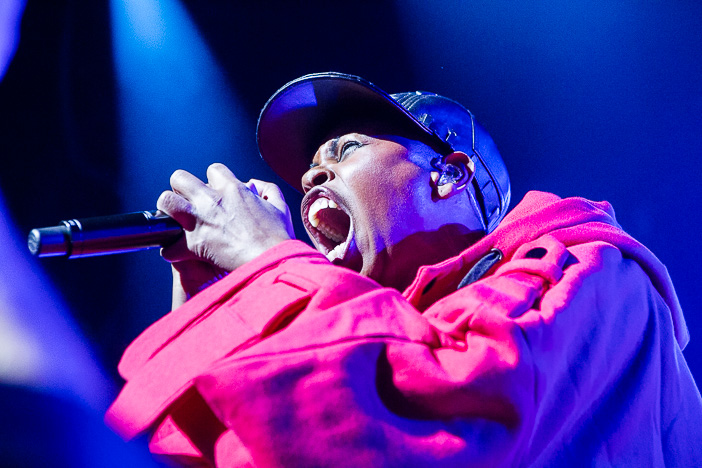 Immediate the energy levels shoot right back up; “Amsterdam, are you ready to dance?”, Skin askes, to then take the audience back to 1996 with ‘Twisted’, ‘Weak’ and ‘Hedonism’. The show could’ve come to an early climax at this point. There were clearly many older fans present, and the audience eagerly sang along to the twenty year old songs that are arguably still their biggest and most well-known hits to date. The songs have stood the test of time and were performed flawlessly by the band, although a trained listener would’ve noticed that Skin cheated a little on the highest notes in the bridge of Weak, and didn’t quite sing all the parts. It wouldn’t be fair though to chalk that down to Skin’s age and stamina: the now 49 year old singer sang her lungs out tonight and has chosen her moments in tonight’s show carefully and wisely. Her energy is infectious and never falters. For almost two and a half hours she executed the intensive melodies of their repertoire perfectly, a marathon performance that most young performers will not parallel. And, like a true trained marathon performer, Skin saves her highest belt for the end of the show, that closed with not one, but two encores. 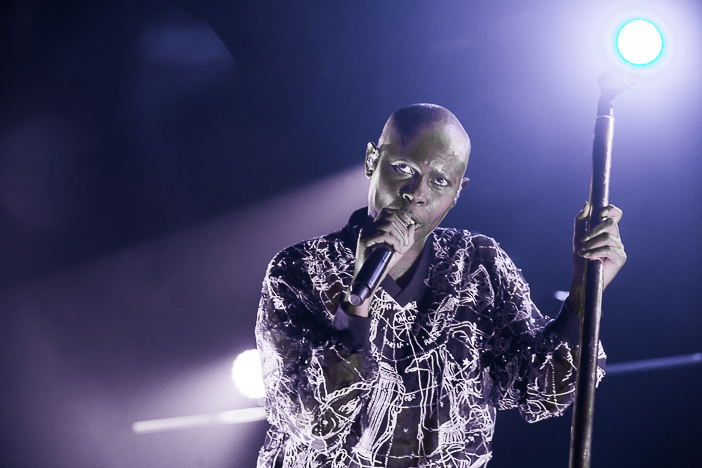 Politics have always been present in Skunk Anansie’s repertoire, and thus here tonight. Skin spoke of an “age of fascism, sexism, racism and homophobia. Do not stand for it! It’s time to roll up our sleeves and fight!”. Skunk Anansie has been fighting this fight for many years as illustrated in tonight’s set list by the twenty year old songs ‘Yes it’s Fucking Political’ and ‘Little Baby Swastikka’. During that last song something else also became very clear about tonight’s show. Even Skin took notice and pointed it out as she positioned herself in the centre of the hall in the middle of the audience. “That bass man, fuck, that just made me literally shit my pants”, she called out at the start of the song, hearing for the first time what the audience had been hearing all along: The sound was loud. Very loud. Too loud. Skin’s voice was often overshadowed by the lower notes coming from the bass and drums, and therefore it was not her incredible voice that blew the audience away tonight, but the unbearable volume.

At the end of the first encore the show looked like it would end spectacularly with ‘Charlie Big Potato’. People started to quickly stream out through the exits to collect their coats even though the houselights has not yet been turned on, a well-known signal that there is more to come. Perhaps they had already had enough. When a notable percentage of the audience has already left, the band returned for one last encore, opening with an acoustic version of ‘You Follow Me Down’, to eventually finally end the show with ‘100 Ways To Be a Good Girl’. And, while the rest of the audience flooded out through the doors, the LED screens were lit up one last time, filling the halls with bright white light as they displayed in huge white capitals: “WE ARE ALL IMMIGRANTS. #RESIST”. Skunk Anansie delivered a long, energetic and loud performance start to finish. Let’s hope the intolerable sound levels did not drown out the band’s energy and message, because the band, and notably Skin, was amazing tonight: their message still relevant and topical twenty years later, the audience satiated and satisfied, but mostly our ears were very, very tired.