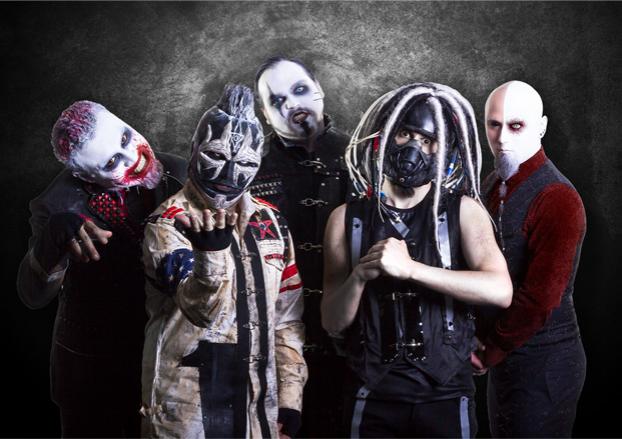 Maniacally-masked Portland, OR hard rockers Amerakin Overdose might be a new name to some, but the band has been working hard underground since 2010 – spawning an impressive following as rapidly as agovernment-created contagion with the release of their original self-titled album. 2016 sees the release of Amerakin Overdose’s new full-length follow-up, The Great Amerakin Dream.

The “I, Alone” video was directed by Karl Whinnery. In a group statement, the band says, “The concept behind the song and video is basically about standing up for yourself and believing in yourself. The video depicts people being isolated from the world and looking in from the outside and seeing what a mess it is. They realize they have to take control of their own lives.”

Bringing an intense experience both audibly and visually, Amerakin Overdose is based conceptually on corporate America – where greed and power is the coin of the realm. Amerakin Overdose discusses the concept behind The Great Amerakin Dream, “The album is a journey through the common struggles of the “American Dream”. Be the biggest, richest, baddest, best looking, have the houses, cars, women, fame, drugs, sex etc. The album presents the listener with the temptations of the world. Like a drug, it has its moments of highs, lows and delusions. It shows the struggle of wanting it all, having it all, losing it all and being reborn. Believing in yourself and yourself alone and freeing everything that slaves you.”

Amerakin Overdose’s new album featuresguest vocalist Waylon Reavis (former vocalist for Mushroomhead) who co-wrote and sings on the track “Letting Go”.The band plans to release “Letting Go” as their second single later this month. Amerakin Overdose caught Reavis’ eyes and ears when they shared the stage with Mushroomhead on tour in 2015. He was impressed by Amerakin Overdose’s consistently energetic performances night after night, extensive merchandise line and rapid sales on the road – proving their powerful fan engagement ability. It was obvious that this wasn’t their first time on tour with an established band, having performed with a long list of national acts in the past.

Amerakin Overdose brings a raw energy and heaviness to hooky hard rock that has long been missing from the industry. Primary production credits on The Great Amerakin Dream go to Amerakin Overdose mastermind and vocalist Cody Perez and keys/synth player The Human, who work closely together to write and record their music at Human Studios. The album also features guest production from Ahrue Luster (Ill Nino, Machine Head), further pushing the sonic envelope and positioning the band with a bright future the hard rock scene.