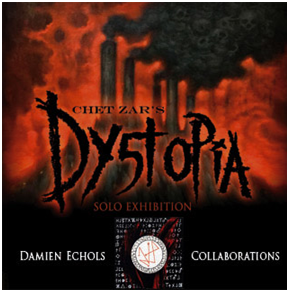 Copro Gallery presents Chet Zar’s ‘DY5TOPIA’! A Dark Universe, evidenced by his paintings, where “monsters” are depicted in states of confusion, fear and suffering. ‘DY5TOPIA’ appears post-apocalyptic, industrial and foreboding, the skies at times stained the color of blood, smokestacks jutting from the mountainous wastelands belching out murky black death.

The ‘DY5TOPIA’ EVENT, discussed in Zar’s Kickstarter pitch video, has endeavored to transform Copro Gallery into his Dark Universe: ‘DY5TOPIA’! The exterior of the gallery boasts a full street scene from ‘DY5TOPIA’, including industrial wall facades, smokestacks, leaking pipes, a mausoleum and many other suprises!

In addition to Chet Zar’s ‘DY5TOPIA’ paintings, the interior of the gallery will be similarly transformed, with live-action appearances by Zar’s characters: Black Magick and Interloper! In the spirit of the autumn sesaon and Dy5topia Dark Universe everyone attending will be invited to dress as a Chet Zar monster, or any monstrous being of choice. Placards will also be placed throughout the gallery, with excerpts from ‘DY5TOPIA’: A Field Guide to the Dark Universe of Chet Zar (currently in production), guiding you through the experience!

This will certainly be Zar’s most awe inspiring and interactive solo show to date, and a futuristic glimpse into ‘DY5TOPIA’: A Field Guide to the Dark Universe of Chet Zar.