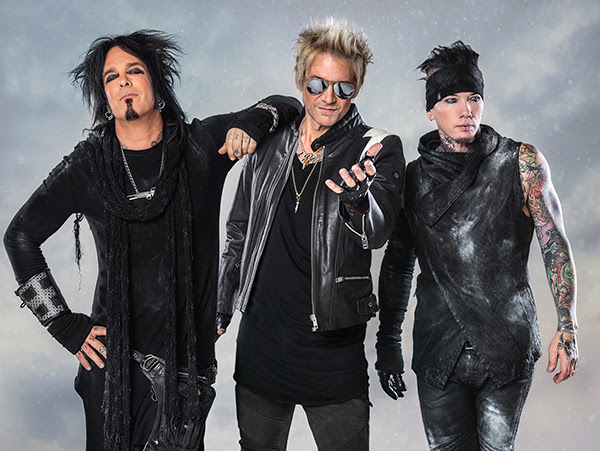 SIXX:A.M. unleash the first new track, “We Will Not Go Quietly,” from their November 18 release, Vol. 2 Prayers for the Blessed TODAY! The official video for the outsider anthem also premieres today and was directed by iconic director Wayne Isham (Michael Jackson, Muse, Britney Spears). Filmed during their show in Edmonton, Alberta last month, the video offers viewers a “show-day-in-the-life-of” the band, in addition to their powerful on-stage energy. “We Will Not Go Quietly” can also be heard as the theme song of A&E’s Gangland Undercover, which begins airing December 2 (check local listings).

“’We Will Not Go Quietly’ takes the call-to-action spirit of “Rise” [from Vol. 1 Prayers For The Damned] to a whole new level” says lead vocalist James Michael “It reflects the raw passion with which mankind fights as some of our most basic human rights are being threatened. We are excited to share the song and video with everyone and hope that it inspires people to continue to strive to make the world a better place”.

Written and recorded at the same time as Vol. 1, Prayers For The Damned (April 2016), Vol. 2 Prayers For The Blessed acts as a companion piece to the first volume while simultaneously elevating the band’s sound in every area. “This band has always found the light within the darkness and I think that’s especially evident on this album,” Ashba explains. From the lead single, “We Will Not Go Quietly”, to the operatic show stopper, “Maybe It’s Time”, and groove-driven, radio-ready rocker, “That’s Gonna Leave A Scar,” Vol. 2 Prayers For The Blessed displays the many sides of Sixx:A.M.’s sound, something that the band was able to develop by ramping up the amount of time they spent out on the road. “We really found ourselves onstage and it’s influencing the way we write,” says Nikki Sixx. “We started focusing on our music not only as songwriters and lyricists but also stayed conscious of what would transfer over live to the audience.”