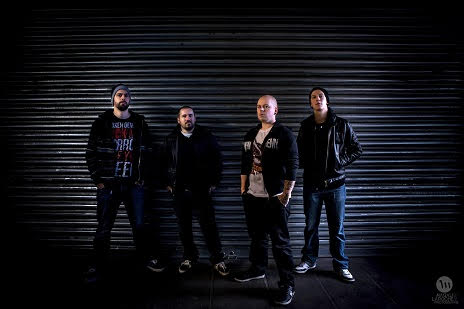 A few weeks after a first excerpt with the lyrics-video of “Vultures”, French Hardcore/Metal/Thrash act Eight Sins just premiered a brand new official music video illustrating the song “Ten Years”, celebrating the 10th Anniversary of the band and planned to feature on it’s upcoming album ‘Serpents’, coming out on November for CD and Digital formats.

Started in 2006, Eight Sins spent a long time reaping the stage before to record their debut album called ‘Straight Hate’ (2008) followed by ‘Blood Revenge’ (2009). Two first releases were very well received by the public and made the band as one of the best act in the French hardcore scene.

A few line up changes later, that led them to find its true sound, the band began a new chapter with ‘World of Sorrow’ (2013). Dedicated to play loud, influenced by a large scale of music sub-genres : hardcore, thrash and all types of metal, Eight Sins play a no compromise thrashy metal hardcore in order to give brutal and groovy liveshows.

After touring and playing regurlary on many stages across France, Germany, Italy, Belgium or Switzerland with bands such as Lionheart, Municipal Waste, Orange Goblin, Crowbar, Madball, Unearth or Walls Of Jericho; 2016 is the most important year with their latest upcoming album ‘Serpents’ which shows another step forward in their hard work.