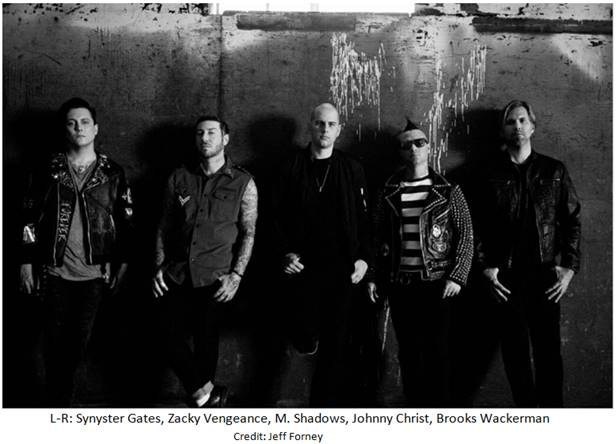 Avenged Sevenfold has “surprise-released” THE STAGE, becoming the first-ever rock band to drop an unannounced album in both digital and physical form. THE STAGE, available HERE, is the band’s 7th studio album and first for Capitol Records.

The Southern California-based quintet (vocalist M. Shadows, guitarists Synyster Gates and Zacky Vengeance, bassist Johnny Christ and drummer Brooks Wackerman) revealed the news at midnight eastern, surprising the millions of fans who were watching their live-streamed performance from the rooftop of the Capitol Records Tower in Hollywood, CA.

The groundbreaking event saw the band give a 3D/360-degree live-streamed virtual reality performance, enabling fans around the globe to view the show on Universal Music Group’s newly released VRTGO VR platform, powered by VRLIVE’s advanced technology, and experience Avenged Sevenfold’s electrifying set as if they were there for this first-of-its-kind immersive event.

Fans attended the event in-person, flooding the streets and sidewalks around the tower to experience a concert amplified by augmented reality (AR) technology, which intensifies real-world environmental elements with computer-generated sensory input such as graphics, video and sound to enhance the live experience. VRLIVE streamed the event to 50 Samsung Gear VR headsets on the ground level of the event for fans to virtually transport themselves to the stage. Afterward, the band celebrated with fans, taking photos and sharing stories about the secretive release.

THE STAGE is the follow-up to Avenged Sevenfold’s 2013 release, Hail To The King, which entered The Billboard 200 at No. 1. Co-produced by the band and Joe Barresi (Queens of the Stone Age, Tool), THE STAGE is a work of immense scope and ambition, featuring 11 panoramic tracks tied together by an Artificial Intelligence theme. Inspired by the writings of Carl Sagan and Elon Musk, the album is the band’s first thematic release. While the term “AI” conjures up images of robots and fantasy films, the band steers clear of a science fiction storyline. Instead, the album sees them taking a futurist’s look at the accelerated rate at which technology’s intelligence is expanding and what that means—good and bad—for the future.

Working with new label Capitol Records, the band’s plans for a stealth release were months in the making, and kicked off a few weeks ago with a guerilla campaign that saw projections of their deathbat symbol mysteriously appearing on landmarks around the world. Fans and media reported sightings and shared images from Paris, Sydney, London, Tokyo and Berlin, to name but a few. Anticipation and conspiracy theories reached fever pitch when rumors regarding supposed album titles and a December release date began to spread.

This weekend, fans can pick up exclusive band merch at Avenged Sevenfold pop-up shops in New York City and Los Angeles. The New York store (located at 68 Greene St., NY, NY 10012) will be open Friday from 11am – 9pm and Sat/Sun from 11am – 8pm. The Los Angeles shop (located at 6615 Hollywood Blvd, LA, CA 90028) will be open Fri-Sun from 11am -8pm. Both locations will be carrying limited-edition items created specifically for these events.