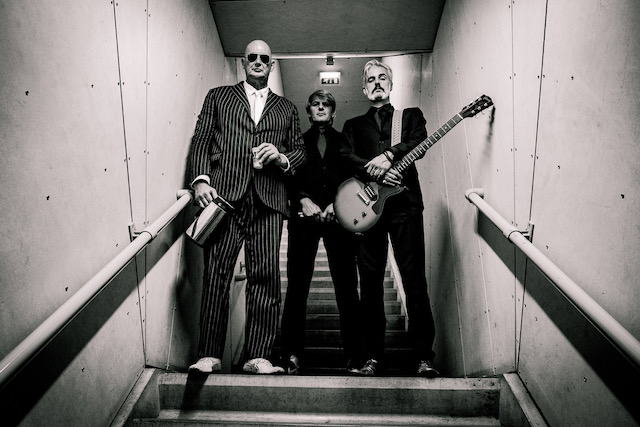 Mascot Label Group is thrilled to announce that the Belgian, multi-award winning threepiece Triggerfinger has signed with Mascot Records. One of Belgium’s finest guitar bands is joining MLG’s roster which features talents such as Joe Bonamassa, Black Stone Cherry, Ayreon, Beth Hart, Monster Truck and Bootsy Collins. Triggerfinger is currently finalizing the successor of their successful album ‘By Absence Of The Sun’, due for worldwide release after summer. The band will start a European tour following the release of their fifth studio album, from September on.

For those who have never heard of Triggerfinger: imagine three sharp dressed man, in suits, with the boldness of Motörhead, Marc Bolan’s grooves and Chuck Berry’s relentlessness. The result? Triggerfinger, a well maintained riff-machine but also Europe’s very best kept secret. Triggerfinger is a band that has developed the hard way; years of touring clubs, pubs and festivals and dives of Europe have bred a fierce, unique and raw sound.

Triggerfinger is guitarist/vocalist Ruben Block, bass player Monsieur Paul and drummer Mario Goossens, Triggerfinger have rocked out together since 1998. Following the release of their first three recordings; ‘Triggerfinger’ (2004), ‘What Grabs Ya?’ (2008) and ‘All This Dancin’ Around’ (2010) the group received unexpected attention when their live-on-radio cover of Lykke Li’s “I Follow Rivers” went viral and hit #1 on the Belgian, Dutch, Austrian and Polish charts in early 2012. Then Triggerfinger’s latest album, ‘By Absence Of The Sun’ (2014) reached the #1 position and was rewarded with a gold record in both Belgium and The Netherlands. The Dutch press wrote, in admiration “Triggerfinger shows the ability to let the most gritty rock swing”. And that’s exactly what attracted Ed van Zijl, Mascot Label Group’s CEO: “Triggerfinger is incredible, both in the studio and on stage. They’re vile and hard, with a unique appearance and a refreshing sense of humour. A band that deserves to be acknowledged by the international music scene. I am convinced that we can achieve that with our dedication. We are very happy to welcome Triggerfinger to our Mascot family.”

Triggerfinger played almost 200 shows in 20 months in Europe, Japan and Canada since the release of ‘By Absence From The Sun’; they performed at popular festivals like Pinkpop (where they replaced the Foo Fighters who cancelled after Dave Grohl got injured), Lowlands, Rock Werchter, Pukkelpop, Sziget, and Hellfest (drummer Mario got elected as the best drummer of the festival), and they have supported The Rolling Stones, Muse, Deep Purple, Die Toten Hosen, Red Hot Chili Peppers, Big Sugar, and Thin Lizzy. But not only the music related events are charmed by the Belgian gents: visitors of the prestigious Roland Garros tennis tournament and the heavyweight title fight between Wladimir Klitschko (UKR) and Tony Thompson (USA) got to experience Triggerfinger’s sizzling and explosive rock ‘n roll show.

The rest of Triggerfinger’s year will be completely dominated their new album, which will be released on Mascot Records this fall. “We are really excited about this new partnership with Mascot”, says Triggerfinger’s Ruben Block. “Mascot has a strong international network that is truly effective. And they’re not just focussing on album sales, they’re also working on possibilities to play live both inside and outside Europe.”