Dave Kerzner: It started with keys. 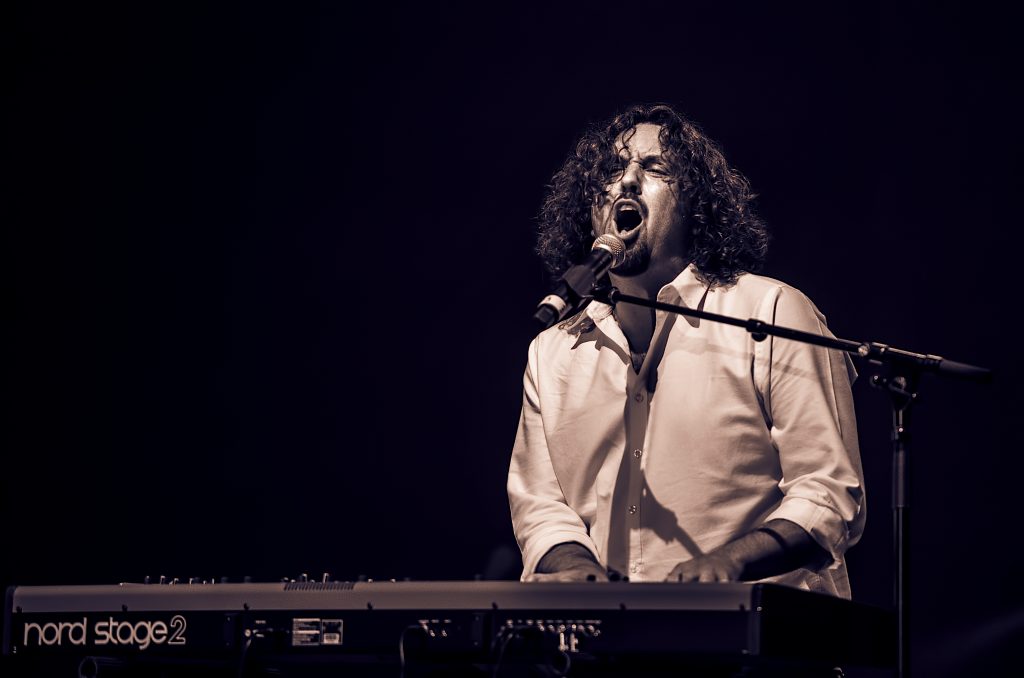 Dave started playing classical piano when he was 7 years old. He was not very fond of how strict and boring the teacher was. They found a new piano teacher willing to do whatever he wanted to do. Sometimes Dave just watched him play, and asked how he did it. Dave also asked his teacher to figure out parts by ear from albums he liked, and to show how to play it.
Around the age 14 he had a synthesizer keyboard rig and started playing in rock bands. They used the garage to jam. He learned to play drums by using the drummer’s kit when he wasn’t around.
As a vocalist, he is a late bloomer. He started singing in his mid-twenties. He didn’t really sing publicly until about 5 or 6 years ago. Dave says: “These days I enjoy writing lyrics and singing as much as I do writing on and playing keyboards.”
When I asked Dave to mention his three favourite keyboards. He replied:” Some of my favorites would be the Wurlitzer 200A electric piano, the Mellotron and a tie between a Moog Minimoog and an Arp ProSoloist or 2600 or ummm Prophet 5 or well, you see, it’s hard to pick just three! Haha.”
It’s obvious, Dave is a keyboard lover, he tells me: “I’m generally more proficient and comfortable playing from a keyboard. So sometimes I’ll play guitar and bass parts from the keys, especially in the songwriting process where it may end up getting replaced by a real guitar and bass player. But, I do end up playing acoustic rhythm guitar on the albums I work on.”

The process of a ‘Static’ 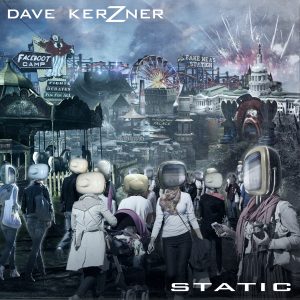 Dave explains: “Static started with the title track which was originally going to be on my album ‘New World’. I left it for the next album and built the concept around the themes. Too often we get in our own way and the many sub-stories of the album ‘Static’ deal with different aspects of that. On a concept album, there’s a certain framework and guideline I set for what I want to say overall. And then each song sort of speaks to me from the music inspiring me to write the words. Then it’s all about refining the drafts of lyrics until I feel they poetically express something that gives the listener layers of depth and enjoyable musicality at the same time. On the surface, it may just be that the words sound cool and fit a nice melody. Going deeper some lines may have multiple meaning. A lyric can really be food for thought and spark all kinds of interesting feelings and ideas in people. Every listener gets different things from it. I like that!”
Here you can find the review I wrote for ‘Static’

Dave is a multi-instrumentalist, singer-songwriter, sound designer and
producer. He also works on sample libraries, music production tools and educational videos for companies like IK Multimedia. And last but not least he is CEO of ‘Sonic Reality’. This is his own company.
We can see what he does on stage. But we can’t see what he does for Sonic Reality. I asked him to reveal this ‘mystery’. I quote: “With Sonic Reality we record the sound of instruments and digitally recreate it. So, a musician can play that instrument’s sound from a keyboard or midi controller. We don’t specialize in making midi files themselves. When it comes to offering any musical elements such as “loops” we tend to limit that to stylistic song construction kits, orchestral fx, bass lines and drum grooves. Such as performances from famous drummers like Neil Peart of Rush or Nick Mason of Pink Floyd, Terry Bozzio, Billy Cobham and others. Basically, in a nut shell, what I’ve done at Sonic Reality for many years is: go around and hunt for cool sounds musicians would want to use in their own compositions and productions. Naturally, as a result, I also have access to this massive library of sounds, many of them rare or unique, that I like to use in my compositions and productions.” 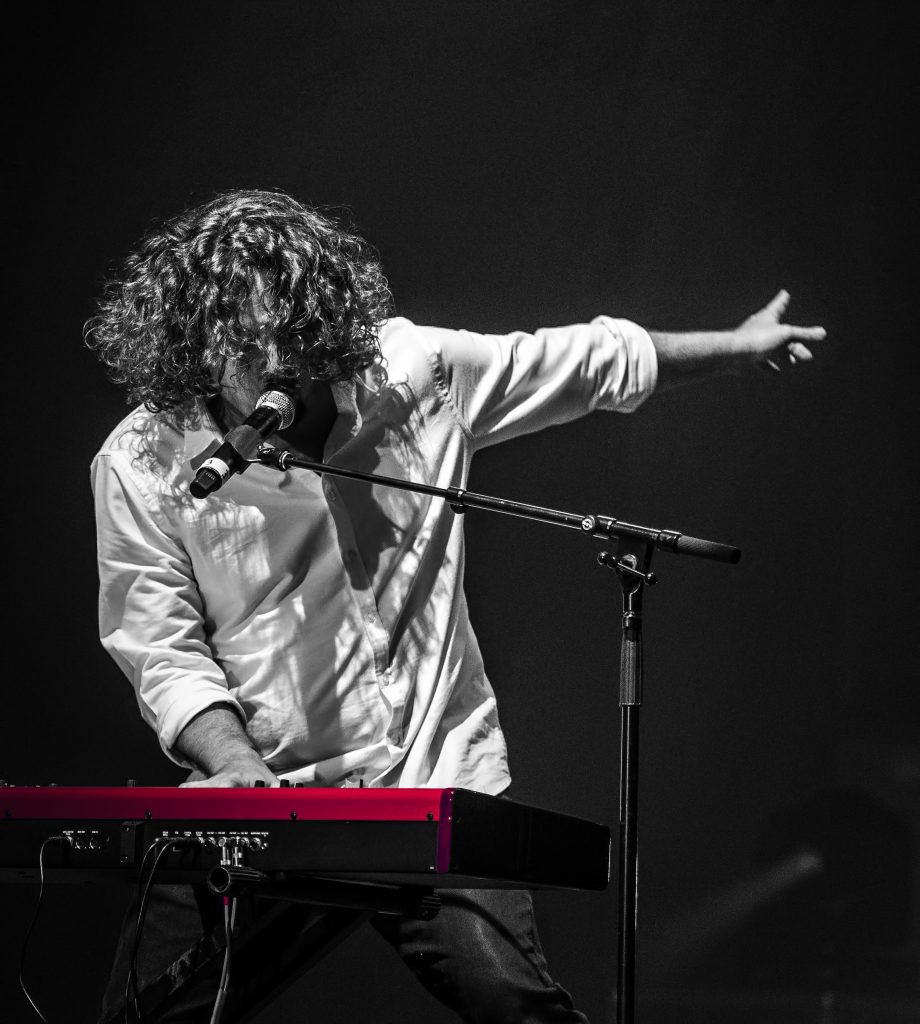 Dave worked with a wide variety of musicians through Sonic Reality. But usually he didn’t work with themselves. It was usually with their technicians and engineers. He never met the Rolling Stones or Madonna. Of course, he worked together with musicians in person. Dave declares: “I spent a day in the studio with Nick Mason and Alan Parsons, as I was producing his drum library ‘Nick Mason Drums’. Of course, that day in England at a studio that replicated the gear of 1970’s Abbey Road Studios was one I will never forget!”
He helped John Paul Jones with sounds for his “Them Crooked Vultures” tour and worked with Keith Emerson, Greg Lake, Phil Collins, Jon Anderson. Dave’s wish is to work with David Gilmour and Paul McCartney.
He loves to be on stage with bands. Dave mentioned: “It was truly an honor and a pleasure to play Prog Dreams with Focus at De Boerderij! I learned a bit of yodeling that night.”

This busy bee has a lot of plans for 2018. Dave is working at a couple of albums. One is more of a singer/songwriter type album with a bit of folk and progressive rock roots. This is an album Dave has been working on for over 20 years. The other is currently more of an instrumental progressive rock album that may turn into a solo album. There’s also a Sound of Contact album coming.
There will be more, so stay tuned!

And the end of this interview I thanked Dave for his time and asked: ”Is there something you would like to say?” Dave’s response was: “Yes! Thank you. I want to tell the people of The Netherlands who are enjoying my music how much I appreciate them. My New World Live concert video was recorded at De Boerderij in Zoetermeer. I’ve been treated very well by publications, venues and web sites there. It’s a special place for me and I look forward to returning! “