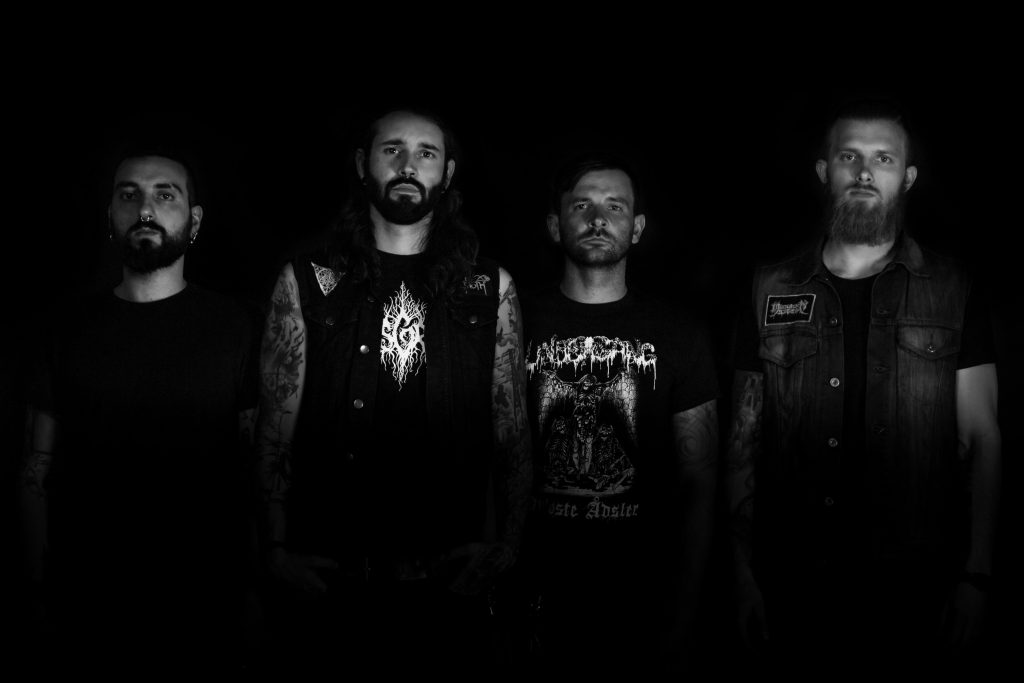 Post-Black & Sludge Doom Metal outfit Downfall of Gaia, who just returned home from tour with Hamferd, have announced more tour dates for their ‘Atrophy Tour’, kicking off in April 2018! Again the band has teamed up with friends and special guests High Fighter, which they already toured with back in March 2017 alongside doomsters Conan. Support will be coming from atmospheric Doom & Black Metal stonerheads Hexer!

With their dark wall of sounds, Downfall of Gaia are moving forward relentlessly, enveloping the listener, absorbing one’s spirit to take one into the realm of the band’s potent sound. Founded in 2008, and although the group’s roots lie within the DIY / Crust scene, they have become more closely associated with a sound that rather corresponds to the impact of an avalanche made from black earth, rock, and dirty sludge, while their lyrics poetically describe the dark side of living.

The band never intended to stagnate, and naturally their sound underwent significant changes: Nowadays Downfall of Gaia drifted away from fast crust punk, which influenced their early work, towards longer and more intense material that became the more massive with black metal, doom and sludge elements. Downfall of Gaia hit the studio in June 2016 and released their recent and critically acclaimed record ‘Atrophy’ via Metal Blade Records in November 2016, followed by numerous shows and tours all over Europe to support the album live. Teaming up with very special guests High Fighter and Hexer will round of Downfall of Gaia’s ‘Atrophy Tour’ perfectly:

„Today we are glad to announce the second leg of our European Tour for April and we are very happy to announce that for this time we will have our very good friends in High Fighter and Hexer as special guests with us!“ Downfall of Gaia comments. „The straight forward sound from High Fighter and the atmospheric walls of sound from Hexer will make this one a diverse and interesting package. We’re really glad to have them on board and hope to see you in April! Looking forward to this one!“

With High Fighter on the bill, Downfall of Gaia will not just meet old and close friends, but also a band that already left its stamp in the current Stoner, Doom & Sludge Metal scene. Formed in 2014 as a total new project by former band members of A Million Miles, Buffalo Hump and Pyogenesis, this band is a volatile cocktail of heavy as hell riffs fuelled by beer and the mighty weedian riffs. Add a heavy dose of the blues and these deadly schizophrenic vocals and High Fighter offer something new to the Sludge, Stoner, Doom & Metal Scene.

After their ciritically acclaimed debut EP ‘The Goat Ritual’ released end of 2014, followed by numerous shows all over Europe and the UK, including festivals such as Wacken Open Air, Desertfest Berlin & Antwerp, Stoned from the Underground, Summer Breeze & many more, as well as having shared the stages with bands like Ahab, Mammoth Storm, Crowbar, Corrosion of Conformity, Conan, Downfall of Gaia, Greenleaf, The Midnight Ghost Train, Brant Bjork or Earth Ship, High Fighter released their first full length album ‘Scars & Crosses’ in the summer of 2016 with Finland’s cult label Svart Records.

Make sure to catch Downfall of Gaia on their European ‘Atrophy’ tour-leg with very special guests High Fighter & Hexer this April.