None other than Gorilla Biscuits, Cockney Rejects, H2O, Dog Eat Dog, Booze and Glory, Carnivore A.D., All For Nothing, Grove Street Families, Hawser and The Young Ones are confirmed for the first outdoor edition of The Sound Of Revolution. The festival will take place on Saturday June 8, 2019 at Strijp-S in Eindhoven, right in front of Klokgebouw. There will be 12 bands playing on two stages and visitors don’t have to miss any band as they will play alternately. There will be enough food and drinks and of course the popular market and merchandise stalls will also be present. 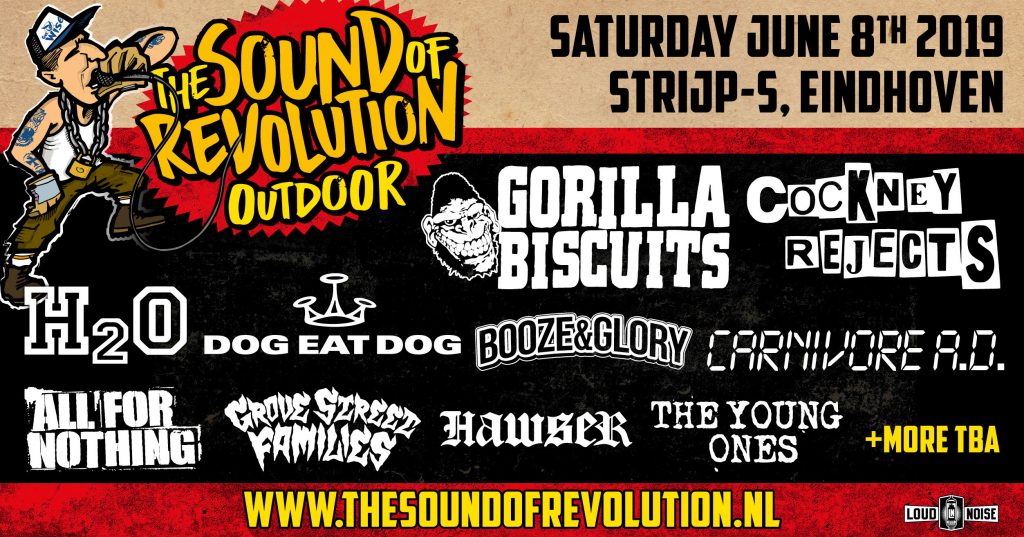 After their unfortunate cancellation and the subsequent, already legendary, team-up of Walter and Luke with Comeback Kid during last years indoor edition, Gorilla Biscuits (photo) comes back in full force to The Sound Of Revolution’s first outdoor edition to make their mark once and for all. The influential hardcore band formed in 1986 before releasing two milestones in NYHC: their eponymous debut album and its follow-up ‘Start Today’. From those first recordings to this very day, the band is known for their passionate mix of melody and aggression, combined with a positive and motivating message.

For over thirty years, the indisputable godfathers of Oi! from the East End of London are giving a voice to the working class. Cockney Rejects are known for their clever-written, anthemic punk rock classics such as ‘War on the Terraces’, ‘Bad Man’ and ‘Oi! Oi! Oi!’. But, with their most recent, career-defining album ‘East End Babylon’ they prove that they are still a force to be reckoned with. As an older and wiser non-stop touring machine, The Rejects come as hard as the trademark three-punch combo of frontman Jeff Turner.

From New York City, this world-touring powerhouse is without a doubt a game changer in hardcore music. Once started as a fun project with former Sick of It All roadie Toby Morse and a few friends, but over the years H2O has defined ‘melodic hardcore’ by combining the heavy New York sound with the more melodic sounds of Descendents and Token Entry. We are more than happy to welcome the band back after their cancellation for The Sound Of Revolution 2017.

John Connor and co.’s debut album ‘All Boro Kings’ showed a trailblazing mixture of hip hop and hardcore. A sound that guarantees rabid crowds everywhere they play. Ever since their memorable show at Dynamo Open Air in 1995, Eindhoven and Dog Eat Dog have always had a special bond. That this bond is still strong was proven during their show at The Sound Of Revolution 2017. We expect that their upcoming show at this years outdoor edition will be a new highlight for both Eindhoven and Dog Eat Dog themselves.

This London-based street punk outfit is responsible for a couple of the catchiest, sharpest and booziest UK Oi! tunes today. While drinking beer and singing ‘I Am Forever Blowing Bubbles’, Booze & Glory formed in 2009 and will celebrate their 10 year anniversary this year. They will join the Persistence tour and support the Dropkick Murphys in the US in the beginning of 2019, release a brand new record in September followed by an European headline tour. But not before the London Skinhead Crew will attend The Sound Of Revolution in Eindhoven!

In honoring the legacy of the late Peter Steele and Keith Alexander, Carnivore reunited as Carnivore A.D. in 2017. Today they consist of original members Marc Piovanetti on guitars and Louie Beato sharing drumming duties with Joe Branciforte, and completed by new member Baron Misuraca on bass, vocals and spine-chilling screams. Expect the songs from thrash-core masterpieces ‘Carnivore’ and ‘Retaliation’ at their finest with their lyrical topics still being relevant today.

Hailing from Rotterdam, All For Nothing is on the road since the very beginnings of this new millennium. While travelling the world, they are doing what they do best: playing passionate hardcore with a melodic edge and engaging lyrics to sing along too. With their most recent album ‘Minds Awake / Hearts Alive’ the Dutch band dropped one of the most empowering records of 2017. As a live band by heart, we are looking forward to their show at The Sound Of Revolution.

Grove Street Families is a notorious bunch of hardcore kids that are all about bringing fun back into the mosh pit. Founded in Southampton, the band started as an act completely dedicated to worshipping the game ‘Grand Theft Auto’. Nowadays they evolved in a groovin’ and hard-hitting quintet as documented on their little taster, the ‘Mixtape Vol. 1.0’, or latest fiery banger ‘Shift’. At the moment they are writing their debut album to be released on the renowned UK label Venn Records and we could not be more excited to hear that new stuff live.

Hawser proves that Lowlands Hardcore is on the rise. The ferocious five-piece is known for their blistering riffing, skull cracking breakdowns and brutally honest lyrics. A sound captured most crushingly on their recent, second album ‘Tough Love’. Live the band is as confronting as the iconic sleeve of that same album accompanied by a vicious performance. Prepare for some violent moshing and bodies tumbling off the stage!

The finest Oi! band from the deep south of The Netherlands is called The Young Ones. Inspired by the classic bands from the eighties like Cockney Rejects, The Business and The Blitz, the bois show us what we all love about this music. After their comeback 7-inch ‘Our Nose In Their Business’, they are about to release a brand new full length record called ‘Greatest Hits Vol. II’. Armed with new material and a fresh set of boots, they are ready to wreck our stage.