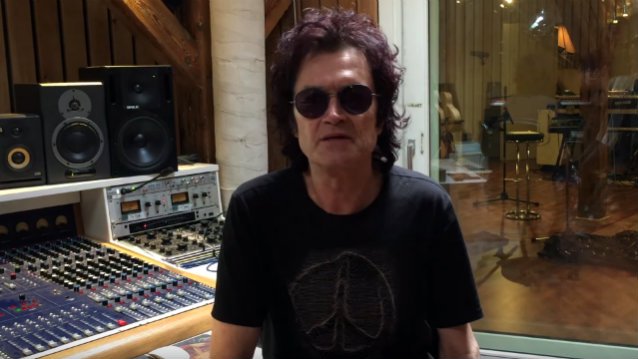 Glenn Hughes has recorded his first solo album in eight years. So far the album has no title for the album that will be releashed in november this year.
He recorded the album in Copenhagen-Denmark with Søren Andersen on guitar, Lachlan Doley on keyboards and Pontus Engborg on drums.
A few song titles are: ‘Let it Shine’, ‘God of Money’ and ‘Steady’ with Chad Smith on drums (Red Hot Chili Peppers).

Recently Glenn Hughes spoke to Billboard.com
“It’s possibly the heaviest record I’ve ever made,” said Hughes. “I don’t want to confuse it with horns-up heavy; it’s not metal. But it’s definitely fucking heavy. It’s dense. It’s dark. There’s some aggression on this record. Every bloody track is begging to be played live.”

Glenn Hughes also spoke to the Danisch magazineMetalized about his music, albums and long time career
“I never make the same album twice,” he said. “Go back to the first TRAPEZE album. The second was different and the third one was different. And then you go to ‘Burn’, and ‘Stormbringer’ was different from that, and then ‘Come Taste The Band’. You got HUGHES/THRALL and that was different from DEEP PURPLE. And then you go to ‘Seventh Star’ with Tony Iommi. That was different from HUGHES/THRALL. And then the blues album and then the Glenn solo albums”.
“Although some of my albums have been very, very soulful and very, very funky, the key for me (as I am an Englishman that grew up in the West Midlands) is rock. But when I moved to America in the early seventies, I started to listen to what came out of Detroit. And I met Stevie Wonder. He became a very, very close friend and still is. He became my mentor”.
“I need people to know that my success has come from the foundation of rock music. As much as I love THE BEATLES, Otis Redding and Stevie Wonder, when you think of Glenn Hughes, you think of the guy who plays bass and sings in any register”.
“I am friends with a lot of famous rock stars and they are one genre. I wouldn’t say who, but they have a one-genre-dimensional sound. You know it’s them. And you know it’s me because of my voice”.
“I have been cursed and blessed with the ability to switch very quickly from rock to soul to funk to acoustic and almost into jazz — without scaring people. When you mix those ingredients, that’s me”.
“This will be an album that is entirely Glenn Hughes music. For that reason, it is an important album.”