While arriving at a beautiful location in the so called “Vondelpark“ in Amsterdam, the reporter started to feel a bit nervous, but after the introduction this feeling was gone right away.  Myles looked very relaxed and calm, even though he has been giving interviews all day.  Rockmuzine was the last one in Amsterdam. Only 10 minutes after the interview he already had to go back to the airport to fly to Paris. “I love this job“ is what Myles told us, which we can imagine! 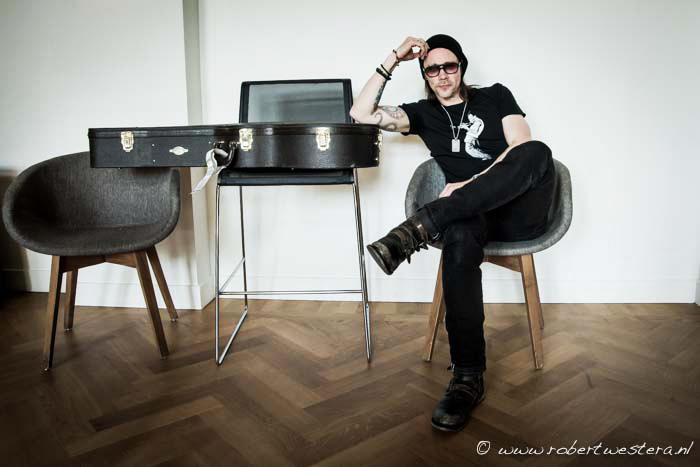 3 years after releasing their previous album ‘Fortress’, their new album ‘The Last Hero’ will come out on the 7th of Octobre. This one is, compared to the previous one, more upbeat, louder and more exciting. The fact that this album differs from the other ones is true. According to Myles, they’ve found the sound that they’ve been looking for all along: “We will continue with this. We try to release different albums each time, we want to surprise our supporters with something new. Which is what they will get, but they can’t expect an album with polka!“

“In the studio we can relax and make good music, but it’s so exciting to play this CD live. It keeps playing in your head. The first time is always the most exciting, because you don’t know how the people will react. We call it the ‘bubble head test: if you don’t see the head moving, you got a problem’. But we’re convinced this will be all right!”

Variety in the songs:

Besides the fact that the new album is more upbeat, the songs differ. From the loving lay-back songs like: ‘Cradle to The Grave’ and ‘You will be remembered’ , till fast and exciting rock songs like ‘Poison In Your Veins’ and ‘Losing Patience’. The album is amazing. Take the first song from the album ‘Show Me A Leader’ as an example. This one starts slowly and calm, but afterwards it rocks! Myles loves this style of music, “I can remember listening to ‘Fight Fire With Fire’ from Metallica for the first time, amazing! My grandmother, who was listening as well, tried to escape as quickly as possible!”.  “ Alter Bridge is a dynamic band, and we’re not afraid to release the different kinds of music”.

Message from The Last Hero:

The topic from the album obviously shows different sides of our Heroes!  How we deal with our heroes, how there’s a lack of heroes, why heroes are so important, a tribute to our heroes.
Myles says: “While my brain is busy with creating song texts, I could see the story. A part of the story was about me searching for our leader, where are we going. But at a specific moment a turning point is coming, whereby you can look at the future.

“You made a decision, and you got to deal with it.”

This can give you sad or dissapointing moments, but at the time you made your choice, and you’ll have to deal with it. Eventually ‘The Last Hero’ is not a concept album, but it obviously consists of a topic, which has different sides. It’s just like abstract art. You can give it your own interpretation. See what you want to see. As a listener, you’re free in opinion”.

Maybe only one out of ten riffs will be on the album:

“Before this album developed, we had lots of other songs to release. But maybe only one out of ten songs will be on the album, because we got so many songs. The ‘disadvantage’ is that I barely have any hobbies. When I’m in my room, I’m writing! This is the same for Mark (Tremonti red). We’re always writing. From all these riffs we can make a good choice together if the song is suitable for Alter Bridge, Slash, or Tremonti (Mark’s band)”.

Besides being a singer and guitarist from Alter Bridge, Myles is a singer for Slash as well: “At Slash it’s easy, he comes up with the riffs and melodies, every now and then I change things in order to change the melody a bit. This makes it easier for me to choose for the songs from Alter Bridge”.

While writing and recording ‘The Last Hero’, the band has switched to another label. Why did they do this?  “ Not because our previous one was bad, but they had different ideas at Napalm which fits us more. Many people will think that this is why the album is louder, because that’s Napalm’s image. But when we signed the papers we weren’t even sure what we were doing. We had finished the album already by then. When we gave them the rock album, we could’ve given them a Polka album instead as well”.

“Amsterdam is very important to us. We’ve recorded a live dvd over there once, the one which we still think is the best of all. We haven’t figuered out yet if we will do more of it this year. There are different possibilities. But we love Amsterdam, the first time we played here was in ‘ de Melkweg’. with our new tour we visit places where we’ve never been before, for example Asia or South America, but We’re looking forward to performing there again”. After we took a picture Myles left, on his way to another city.