À TOUT LE MONDE, a new beer from Unibroue born of the friendship between its Brewmaster Jerry Vietz and Dave Mustaine, legendary lead vocalist and founder of heavy metal group Megadeth, is officially launching today in the U.S. and Quebec. Named À TOUT LE MONDE as a nod to one of the band’s songs and one of their biggest hits in Quebec, this beer recalls the consonance of Unibroue’s flagship beer, La Fin du Monde. 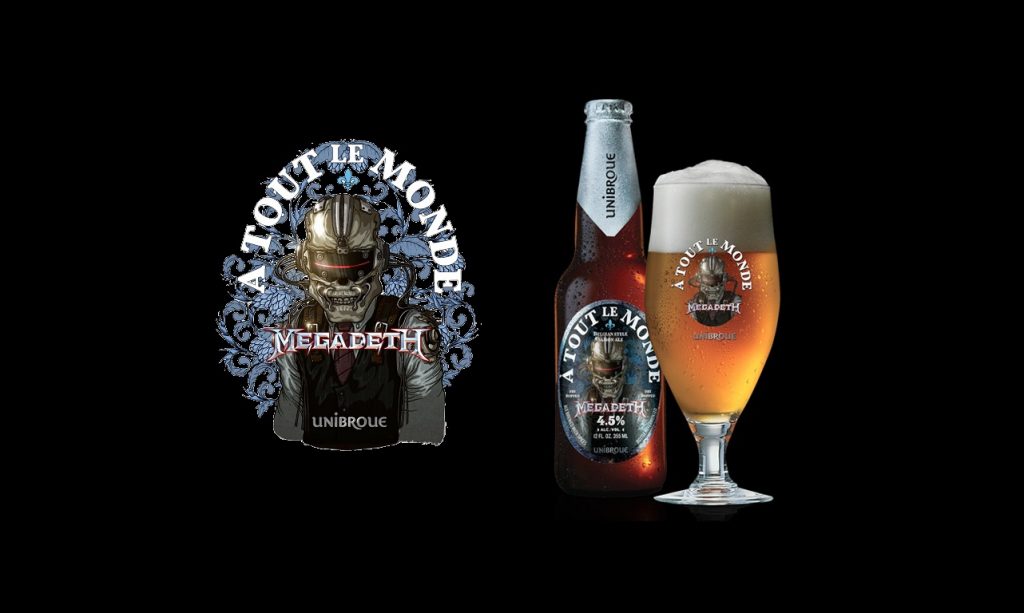 Dave Mustaine became friends with Jerry Vietz during Megadeth tours in Quebec. During their time together, Dave and Jerry created À TOUT LE MONDE as a symbol of their friendship. “At Unibroue, we appreciate flavour – and we know Megadeth is anything but boring,” explains Jerry Vietz, Brewmaster at Unibroue. “To Megadeth’s delight and that of their fans and connoisseurs, we’re offering an uncompromising beer with rich hoppy aromas, created according to Dave’s personal tastes.”

“Our shared passion for excellence produced a one-of-a-kind saison beer,” added Dave Mustaine, Megadeth’s lead vocalist and founder. “I’m thrilled to present this new beer to my fans, and everyone who loves good beers with character.”

À TOUT LE MONDE ale is a flavorful Belgian style dry hopped golden saison with hoppy and spicy notes. Topped by an unctuous head, this beer will give fans a clean, fresh taste and a crisp dry finish inviting to take another sip. À TOUT LE MONDE is now available in 12 oz. bottles (4 pack) at all Unibroue retailers in the United States, as well as on tap in several bars et restaurants.

This evening, as part of the launch of Unibroue’s new, Quebec-brewed À TOUT LE MONDE beer, Dave Mustaine is inviting all his fans to join him in celebrating his 55th birthday and try his new beer. The festivities will take place at World of Beer – UCF Area (3402 Technological Ave) in Orlando, FL, during an epic party that lucky attendees will never forget. The party will also be live streamed on the event’s Facebook page.

Founded in 1991, Unibroue is Quebec’s top craft brewing company and ranks among North America’s biggest of its kind. Located in Chambly, Québec, Canada, it brews over 15 different beer brands and has won more than 305 international medals since its launch. Its refermented beers are brewed using time-honoured Belgian and European methods, perfected over the past two centuries by Trappist monks.

Megadeth burst onto the scene thirty years ago, virtually inventing a genre with their debut album, Killing Is My Business… And Business Is Good! (recently recognized by VH1 as the Greatest Thrash Metal Debut Album of All Time), selling more than 38 million albums worldwide, earning numerous accolades, including 11 Grammy® nominations, and scoring five consecutive platinum albums—including 1992’s two-million-selling Countdown to Extinction.