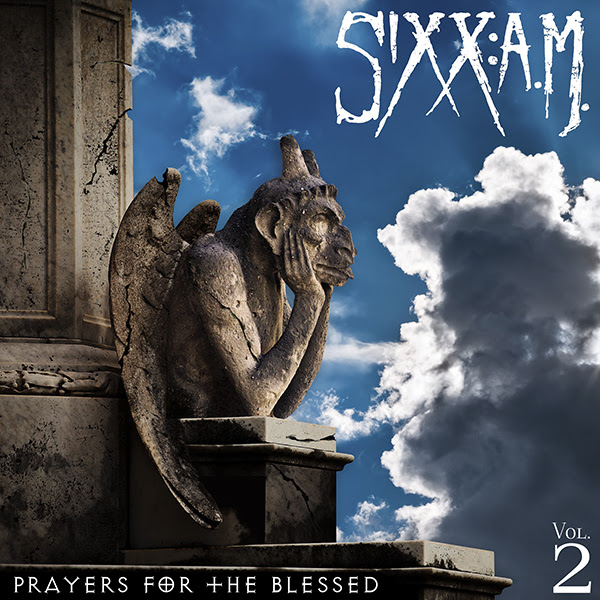 Vol. 2 ‘Prayers for the Blessed’ includes outsider anthem and lead single “We Will Not Go Quietly,” the classic 70’s ballad “Without You,” the operatic show stopper “Maybe It’s Time,” and the groove-driven, radio-ready rocker “That’s Gonna Leave A Scar.” The official video for “We Will Not Go Quietly” was directed by iconic director Wayne Isham (Michael Jackson, Muse, Britney Spears) and filmed during their recent show in Edmonton, Alberta. It offers viewers a “show-day-in-the-life-of” the band, in addition to their powerful on-stage energy.

“’Vol. 2 Prayers For The Blessed’ is without a doubt the most visceral and passionate record that SIXX:A.M. has ever recorded. We opened the floodgates on this one. Musically and lyrically we went deeper than we ever have before.” –James Michael

Touring three continents this year, SIXX:A.M – comprised of Nikki Sixx, Dj Ashba, and James Michael–have been sharing their music with a global audience and performing the songs from Vol. 2 ‘Prayers for the Blessed’. SIXX:A.M.

Formed in 2007 on the streets of Los Angeles, SIXX:A.M.’s mission has remained steadfast: to provide iconic, hard rock to the masses that boasts unrivaled musicianship and a loyal legion of devoted fans beyond compare. Comprised of vocalist James Michael, guitarist Dj Ashba, and bassist Nikki Sixx, SIXX:A.M. is truly a culmination of each artist’s talents, taking from each of their names (Sixx, Ashba, and Michael). In addition to providing unparalleled vocals, Michael is also a highly acclaimed producer, having worked with Kelly Clarkson, Halestorm, and Papa Roach, and boasts the producing and mixing credits for all of the SIXX:A.M. albums released.

To date, the band has released 4 studio albums; ‘The Heroin Diaries Soundtrack’ (2007), ‘This Is Gonna Hurt’ (2011), and ‘Modern Vintage’ (2014), and ‘Prayers For The Damned’ (2016) and 3 EP’s; ‘X-Mas In Hell’ (2008), ‘Live Is Beautiful’ (2008), and ‘7’ (2011). The band has come a long way since their live debut in 2007 at Crash Mansion, performing 5 songs off of The Heroin Diaries Soundtrack, an audible, introspective recall of Sixx’s autobiography, ‘The Heroin Diaries: A Year in the Life of a Shattered Rock Star’. A hero for the cause, Nikki spoke on the epidemic in Washington during National Recovery Day, creating an even deeper, more personable bond with the artists.

In combination with it’s success and topical importance, ‘The Heroin Diaries’ is currently being made into a Broadway play, further proving its topic’s impact and importance to society. With so much to say and a passion for performing, Sixx penned his next book, ‘This Is Gonna Hurt’, that was soon accompanied by an album of the same name. Both books received notoriety as New York Times bestsellers. This began the band’s longstanding relationship with their fans that has been built off of trust, relatabiity, and honesty, in combination with their heavy-hitting rock anthems. Since, the trio have performed alongside rock mainstays such as Mötley Crüe, and headlined a nearly sold out 2015 US tour with special guest Apocolyptica.