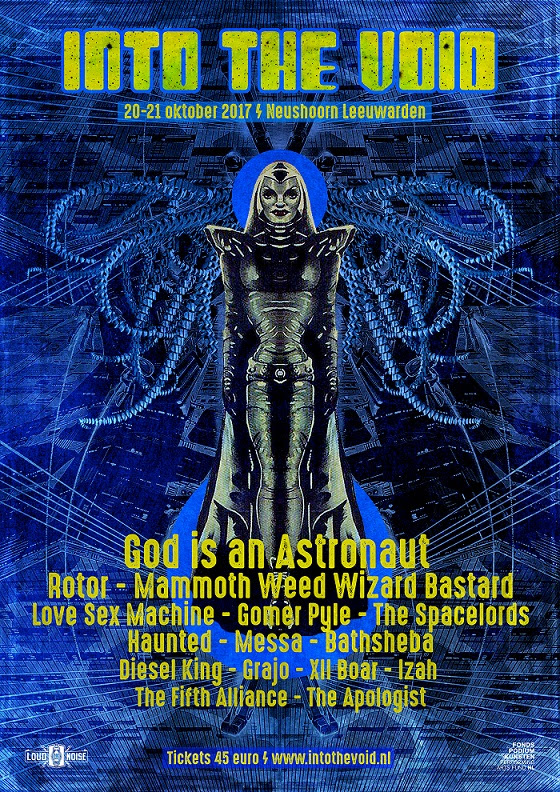 Dutch stoner/metal festival Into the Void announces the first names for the 2017 edition. The Irish instrumental powerhouse God Is An Astronaut is confirmed as one of the headliners. Furthermore RoToR from Berlin, Mammoth Weed Wizard Bastard from the UK will perform at the festival alongside many others. Into the Void will take place on October 20 – 21, 2017 in Leeuwarden, the Netherlands.

In recent years, the Into the Void festival has become the go-to festival in the north of the Netherlands for stoner, doom, sludge and related genres. The first names for the 2017 edition have been announced and alike the previous years, it starts off with a big bang.

One of the headliners will be the Irish band God Is An Astronaut. They are currently seen as one of the biggest instrumental bands out there. They took their name from a line in Clive Barker’s film ‘Nightbreed’. Almost 15 years after the formation of the band and 8 albums into their discography, the band’s outlook and ethos still remains the same as it did on their debut – the priority being on releasing and performing music they love.

Another band that has been confirmed is the German four piece RoToR from Berlin. They merge 90s stoner rock and 70s space rock and do so purely instrumental. If you have seen this band before, you know that you can expect a crushing heavyness, tight rhythmic changes and melancholic space trips. On the latest, fifth record, appropriately called Fünf, the band has expanded its horizon and has a more varied sound than ever before: the music has become sophisticated, more transparent, more diverse, before suddenly the ton-weighing head-shaking part kicks in to take the listener to far away sound-worlds.

Both God Is An Astronaut and RoToR will play an exclusive Dutch show at Into the Void 2017, so fans should not miss out!

Mammoth Weed Wizard Bastard from the UK struck a chord with their second album release ‘Y Proffwyd Dwyll’. The sound and approach of Mammoth Weed Wizard Bastard shares common ground with acts such as Ufomammut and Conan with healthy doses of psych and prog added to it. Couple that with Jessica Ball’s soaring voice and you have a truly unique band. The doom band from the UK is not the only one that feature a female vocalist: Haunted, Messa, Bathsheba and Grajo, all confirmed for the festival, will represent a new sound in the doom scene.
The following acts have been confirmed as well: Love Sex Machine (FR) , Gomer Pyle (NL), The Spacelords (DE), Diesel King (UK), XII Boar (UK), Izah (NL), The Fifth Alliance (NL) , The Apologist (NL). Into the Void will take place on Friday 20th of October and Saturday the 21st of October 2017, in Leeuwarden, the Netherlands. The day schedule will be announced at a later moment.