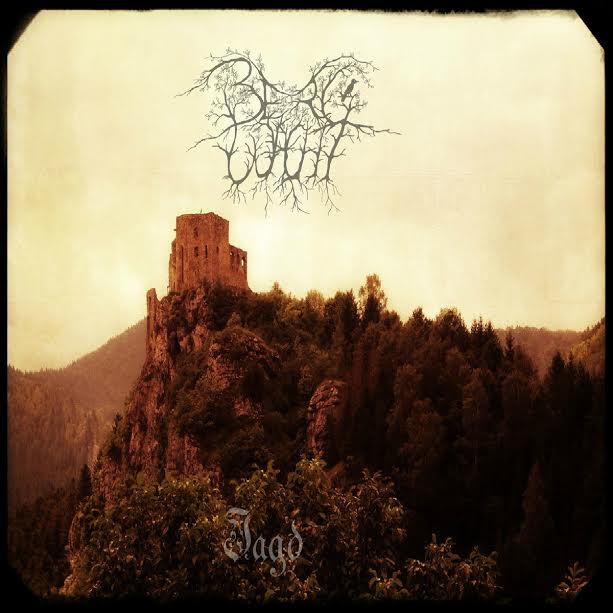 By atmospheric Black Metallers Bergwacht may have slipped under the radar of all but the most ardent of BM aficionados but with the cassette release of this German trios debut EP through Carvetii Productions, this hidden gem will hopefully get the recognition it so rightfully deserves.

Spread across 4 tracks and clocking in at a respectable 24 minutes there is a lot going on here. Ambience, melancholy, Doom and superb Black Metal combine to create something truly unique and refreshing. Title track “Jagd“opens with a doomy, Bölzer-esque riff and switches from a mid to high tempo throughout. But it’s with the epic “Vormachtsstellungen” that Bergwacht set themselves apart from their contemporaries. Abandoning Black Metal entirely for an almost post rock style instrumental. Stylistically similar to Canadian experimental outfit Godspeed You! Black Emperor “Vormachtsstellungen” is a long, meditative composition, simplistic in nature yet truly captivating, immersing the listener in a beautifully mournful soundscape. To add something as daring and grandiose as this to a debut is commendable and already shows Bergwacht have more to offer than just “paint by numbers” Black Metal.

“Schlucht” again opens with a doomy, Bölzer-esque riff but has the feeling of being totally refreshed and energized in comparison to the preceding track. Track four simply entitled “Outro” is just that. An instrumental finale that builds on a droning ambience and is complemented by some simple yet beautiful acoustic playing, making way for a brief passage of distortion and lead work before returning again to a wistful ambience which fades into silence.

At its core “Jagd” is a Black Metal release with some heavy moments of Doom. That being said, the experimentation here cannot be ignored. Take from that what you will but if you missed this release first time round I highly recommend picking up a copy. Available through Bandcamp or Carvetii Productions respectively. (7,5/10)(Carvetii Productions)