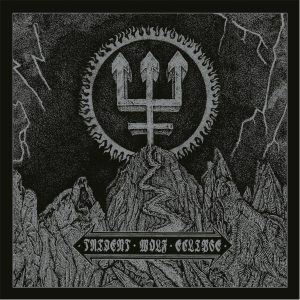 How, after almost 20 years of existence, having crawled with fiery purpose from the BM underground to what many consider to be the forefront of the genre, only to be accused of losing the razor sharp edge that defined you do you silence the critics? You release: ‘Trident Wolf Eclipse’

Succinct, feral and to the point, there is zero fat to be found anywhere across the 8 tracks that comprise this, the groups sixth album. Lead single ‘Nuclear Alchemy’ opens proceedings. Fiery and abrasive this is the perfect way to begin what may well be the most aggressive record Watain have ever released.

Tracks are fired off with machinegun like rapidity with scarcely a calm moment to be found across the records 35 minutes. Songs vary from the raw BM fury of ‘Sacred Damnation’ and ‘Ultra (Pandemoniac)’ to the more mid-tempo but no less ferocious ‘The Fire Of Power’ and ‘A Throne Below’ with even some hints of Scandinavian Death Metal scattered throughout.

What are missing though are long tracks. Tracks reminiscent of ‘Wolves’ Curse’, ‘Legions of The Black Light’ or ‘Waters of Ain’ But what ‘Trident Wolf Eclipse’· lacks in terms of 10 minute long “epics” it easily makes up be being the most consisted (from start to finish) album Watain have released to date! Overall ‘Trident Wolf Eclipse’ showcases a Watain as hungry and focused as ever with the stripped down approach to structure and song writing proving to be this albums coup de maître.