Belgian Evil Invaders were invited to play their first USA festival ever in Milwaukee on April 22nd. This is what happened in USA, read their report here:

As some of you might know we were scheduled for our very first USA festival ever in Milwaukee on April 22nd. The deal was simple: the festival purchases our flights and covers all our costs to make the show happen, but no money for our own pockets. We were definitely up for that and we were stoked to head for the US of A to tear down the house for our 1st ever US live performance. Did we manage to enter the country? Yes, Sir! Did we kick ass and leave the country to ashes after our devastating show? Well, not exactly… Here’s how it goes 🙂 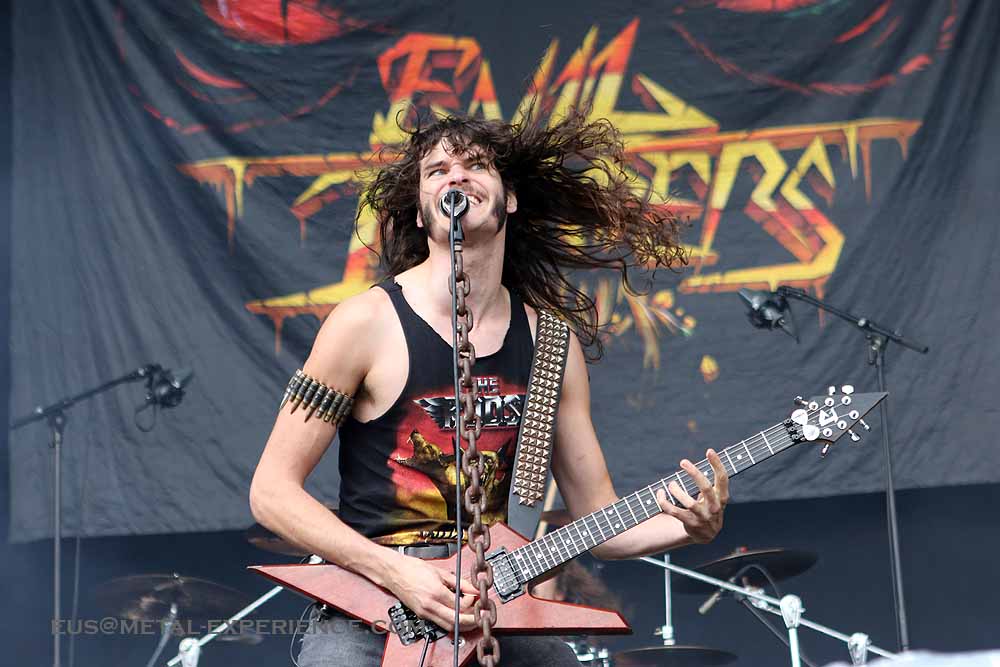 On April 20th we took our flight from Brussels to Chicago. The flight was OK as we already flew multiple times to Japan or South America. We were all good! When we arrived at Chicago airport everything went smooth and we were ready to kick ass. We took our bags, stood in line at customs and went out of the airport as always. Standard procedure, no big deal. Except for… Joeri and Max.
While chatting with the festival driver who would pick us up, we got a text message from Joeri saying that cops were looking for us and that we needed to get back to customs asap. Also Joeri passed customs, but he was waiting for Max to get through as well. But that never happened… Obviously all of us got back and when we arrived back at customs cops immediately took our fingerprints while explaining that we would be sent back to Europe as we didn’t have a valid work permit and thus could not enter the USA. Yes, exactly. Two of us had already passed through customs and were having a cool chat with our driver outside of the airport. I guess they changed their minds for some reason and decided that we could not stay in the US after all. But in the end it’s their country and they can do whatever they want, so that’s cool… 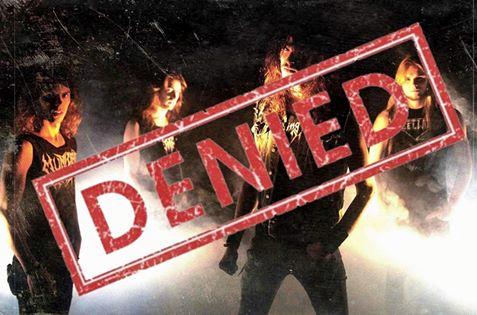 At customs everyone was really nice and they told us that it was not our fault that we couldn’t stay in the country. We’re being kicked out of the country… but it was not our fault. What a relief! Eventually cops googled Max and found out through Metal Archives that Max was playing in EVIL INVADERS and that the band was playing at a US festival where people were paying entrance tickets. So even though we weren’t being paid to perform (which made it kinda silly to apply and spend quite some money on work permits), the fact that festival tickets were being sold was enough to hold us from staying in the US and performing.
Anyway… All our personal belongings were taken from us before being escorted -again, cops were actually very friendly!- to prison. God forbid we would hang ourselves with our own belts or strangle each other with our shoelaces! Ironically, while waiting at the entrance hall there was a television on with US president señor Trump giving some speech. Maybe he was telling that he had caught some evil invaders at the airport, we couldn’t exactly hear what he was saying… After that, cops brought us to our cell where we got nice American water and free food: all you can eat. Joe kinda liked it, so good for him.
Our cell was quite nice as it had a toilet in there and some blood and other human leftovers against the walls. We weren’t too excited about the cameras, though. Especially the one pointed to the toilet. Don’t know if this is common there, but we Europeans tend to keep that area a bit private. Another cool thing was that every once a while cops added another dude to our cell, so eventually we were 7 dudes chillin’ in one prison cell. Eventually we stayed there for 22hrs, lights on constantly probably to keep an eye on us when going to the toilet. They gave us some sort of towels to sleep on, so we didn’t really get why they kept the lights on 24/7. Another cool feature of the cell was that, through our door window, we could see a screen in the control room with the video footage from our cell and keep an eye on that dirty captured scum they had captured.
But unfortunately there comes an end to every beautiful story, so after our 22 hr marathon of 100% pure metal mayhem BOREDOM, cops escorted us back to the airport where people started taking pictures of us like mad as we could just see their excitement! It was there at the airport on that very moment at customs when we realized: we fucking nailed it! We are Metallica! The cops played the game along and told the people that we were VIPs. True story!
Eventually we got back on the plane back to Europe. Surprisingly we had the same stewardesses as on the previous day. They recognized us and were again surprised that we were flying back so soon. We told them what happened and they wished us luck on our future travels to the USA: “Well, better luck next time”.