The 28th of May, a sunny Sunday afternoon, we (that is my son Xavier en me) met with our buddy Marco at the Baroeg in Rotterdam to attend the Speed Metal gig of the day. Three bands were programmed this late afternoon: the Dutch bands Sad Iron and Usurper with as headliner the Finnish band Ranger. A very entertaining line-up for us, especially as Marco had managed to arrange an interview with Ranger. Short after the gig, we met Dimi and Miko backstage for a chat, a very relax chat we like to share with you… 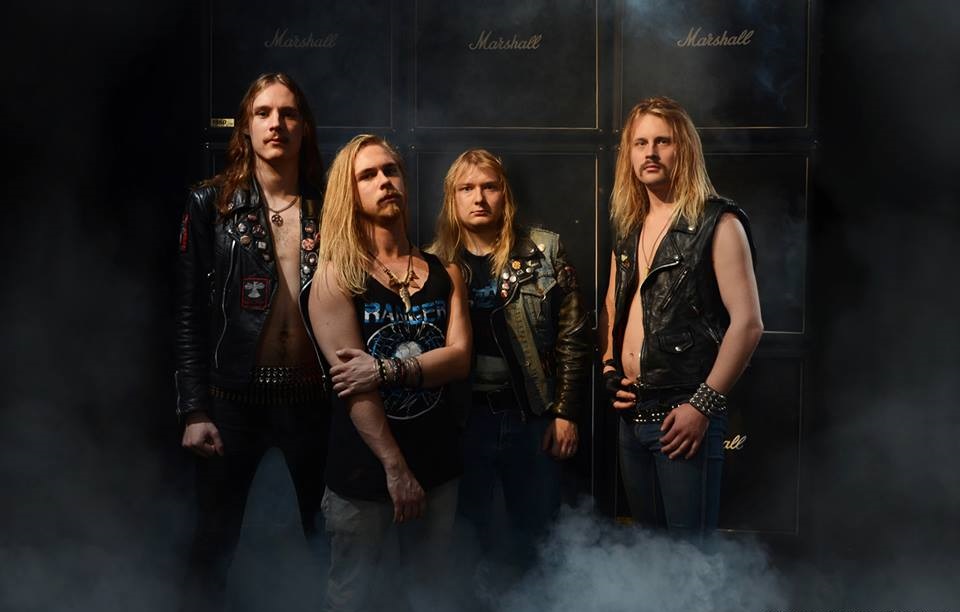 Marco: Hails…! Let’s start from the beginning. You started the band back in 2008 – 2009 (as Turbin) and brought out directly a big bunch of releases. How did you guys hooked up together and was it Speed Metal from the beginning?
Dimi: Yeah it was definitely Speed Metal in the beginning with the old US Speed Metal and Thrash bands from the East coast and West coast that we were fond of, British Heavy Metal and stuff like that.
Miko: We played some covers from Saxon, Angel witch, Anthrax, at the beginning. And Turbin was just a temporary name and then Ranger came out. We needed a name for a show and then we would figure out what’s the band’s name later.
Marco: Turbin sounded cool! You are the two founders, the bandleaders.
Dimi: Yes so to speak.

Marco: Are you active with any other musical side projects and/or other bands?
Dimi: Well some of the guys have, the guitarists did but not really. Of course there are some ideas but this is our main priority, stay focus on Ranger.

Marco: What bands are your biggest influence? I guess 80’s bands like Exciter, Agent Steel or maybe some new band like Evil Invaders, am I right?
Dimi: You mean Evil Invaders from Belgium? No, no we are more influenced by older bands. No bad about those guys. But you know we mostly influenced by 80’s bands. Well the scene, the Speed Metal scene, it was really small and of course we didn’t know each other until 2013 – 2014.
Marco: I was kind of a manager for them so I had to ask!
Dimi: Oh really, ok, cool anyway good guys, really!

Marco: How do you guys rehearse and do you play cover songs then? Are there any covers featured in your live sets too?Dimi: No we haven’t done that in a while.
Miko: No but we recorded one, an Exciter one for a new album that a tribute album. We’re not planning to play it live. We love our own songs so much, yeah.
Dimi: Sometimes we like to rehearse covers, we have “Fast as a Shark” in the recording and the Exciter now in the tribute.

Xavier: How’s the traditional Metal Scene in Finland at the moment? Any recommended young acts around there?
Dimi: There are some great bands right now.
Marco: Instant, do you know them? Young Death Metal band about his age (Xavier)?
Dimi: No, sorry no, we will have to check them out. More some traditional metal bands like Legionnaire, Chevalier and Rapid. Rapid it’s like Venom style, Venom bulldozer, satanic Speed Metal.
Miko: We are friends and they’re very good. Lots of good bands right now, good scene.
Marco: And what about the band Urja? Do you know them?
Dimi: Urja, they’re young guys, they played at Metal Warning Festival.
Marco: Ueah, true. And there was that tall guy, what’s his name, Immu?
Dimi: Yeah, yeah, kind of a legend.
Marco: Are they still around?
Dimi: I don’t think so. We would probably know it if they were active.

Xavier: What about playing live? What’s your favourite country to gig if you are really honest?
Dimi: We have to say Germany! Germany or Scandinavia, Norway.
Marco: And Sweden, did you play there? It’s more like the bands are playing anyway and nobody is watching.
Miko: Yeah, they’ re too busy with the merchandise, buying t-shirts, haha.

Xavier: How does your personal life interfere with the Metal?
Miko: It doesn’t really interfere because it’s pretty much the same to us. It goes hand in hand, it is around all the time. Of course you’re gonna have to work sometimes but the music is there.
Dimi: That is what you represent to everyone, it’s you.
Miko: We still have to work because Speed Metal doesn’t pay…

Xavier: About metal records: What is your personal top 5 Metal records?
Miko: Exodus “Bounded by Blood”, Iron Maiden “Number of the beast”, this is hard! I have to say Picture “Diamond Dreamer”, Mercyful Fate “Melissa”, Judas Priest “Stained Class”, all the classics.
Dimi: In no perticular order Metallica “Master of Puppets”, Iron Maiden “Somewhere in Time”, AC/DC “Back in Black”, Megadeth “Peace Sells”,

Marco: Any future plans?
To tour more of course, a new album, stuff like that but definitely to tour more. Abroad, in the US, maybe sometime to go to Asia too en wherever we can go, you know.

Marco: We took it short because of everything today. We would like a picture with the band if you can.
Dimi: Of course !!
Marco: Thank you for your time and the interview! This is for on the road (headbangerszine). And when the new magazine is out, I will send you a copy. The interview will soon be on the online webzine.