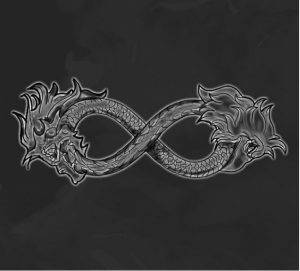 TDW is the abbreviation of Tom de Wit. He is a singer, keyboardist / guitarist and founder of this symphonic progressive metal band. In addition to Tom there are three more guitarists. The total line up is eight people. Five of them are vocalists. In 2016 the EP ‘Aphrodisia’ was released. This was a promo release to raise attention for ‘The Antithetic Affiliation’. On this double album, Tom expresses his emotions (and those of others). On ‘The Idealist’ positive emotions such as happiness and euphoria appear. The music is softer and symphonic. ‘The Cynic’ is a counterpart, and contains much anger, frustration and despair. This is accentuated by heavier and darker music.

The Idealist CD 1
‘The more we remember’ starts with a tender piano solo. Tom whispers the first lines. Instruments are added, including strings. A little later, metal comes up. All the vocals are blending very well together. The balance between the tightly played metal and the strings is superb. In part three, for the first time, a lot of anger can be heard. Due to the unbelievably high pace in which words are bombarded to you, not all is understandable. Therefore I read the lyrics in the booklet along with the singing. The chaos of life is clearly unfolded in music and singing. The contrast between the light details and the heavy parts is brilliant.

A tender piano solo forms the turn to part four. A quieter part; but equally impressive. In part five, bits and pieces of lyrics and music come back from previous parts. Cool, tightly played drumming after which this sublime track slowly dies away. ‘Athem’ also has a fantastic structure. Full of pace- and volume changes. Again there is perfect contrast between heavy music and light strings. You can hear the rage in the color of the voice, but there is also hope. During an instrumental piece there is great ‘’guitar violence’’, played fantastic and fascinating. Finally, there is a turn to a friendly, calm atmosphere.

The Cynic CD 2
‘Monolith – The Descent’ starts in the same way as where ‘Monolith-The Ascent’, the last track of CD1 ended. The lyrics are the same, but in reversed order. At the first listen, you’ll recognize parts of “The Descent” from The Ascent. These two versions are opposites of each other. ‘Dirge’ touched me already on the promo cd. Now I’m moved from the beginning. The quiet drum intro has the cadence of a slow march, from someone who bumbles around burnt out. This new version of ‘Dirge’ is refined. Result: I am seized with emotions.

A fast build-up up of volume in ‘Lest we forget’. Fear and despair sound hear. After some demonic ‘spoken’ words, the lighter part two follows. There are plenty of nice details added for -by example- the keys. The dark part three is played fast. The fast high notes of the strings form a beautiful contrast with the metal. The frustration, especially in the singing, returns. In a short period of time many words are fired at you. A huge sound is an understatement. This really is a wall of strings that bulldozes your senses.

Beautiful transition to a quieter part four. The quiet pieces are interchanged with heavy particles, which last only a few seconds. Goosebumps during the emotionally sung words: “Where do I start to heal and rebuild my world?”. There are horns added, unexpected but awesome. Almost without notice tempo and volume increase. In part five, unprecedented anger sounds again. This grows into total chaos and disorder, but it fits perfectly in the whole. This chaos fades away after the roar:
“I AM FREE“. Words of trust come in place. Super build-up to the end of the CD, even though the quiet part could have lasted a bit longer. What an impressive album!

The names of the eight-man line-up, and of the twelve guest musicians are mentioned below the tracklist. Together they have made a top album. Twenty musicians, it sounds a lot and that’s what it is. But the balance has been preserved. Due to the amount of transitions and contrasts in music and singing, a lot is headed your way. Numerous small details have been added, so you hear new things with every spin. Because of all this, it takes some time to get familiar with this album. Emotions like anger and frustration are evident in singing and music. Everything is in full harmony. There are a lot of layers over layers. In the quieter parts these layers are somewhat subtle. Sometimes I would rather listen with headphones and on other times TDW rumbles on “noise-pollution” level through the living room. At first listening, this is already a very good album. And that’s only getting better and better after listening a number of times. This is a great album. For me (so far) the best 2017 album!

Dvd Progpower 2016
In the introduction Tom tells why the sound of the DVD is anything but good. However, the vibe during the concert was fabulous. That’s why Tom decided to add the DVD as a bonus. What you see is the footage. So please take the quality of sound for granted. TDW didn’t perform on the main stage, but at the chapel near castle ‘’de Berckt’’. The stage was small, so the performance is less dynamic than otherwise. Nevertheless, you feel the intense way this band performs.

You can see various nice interactions of Tom with the audience, also between the songs. He showed his warm personality. He seems to regard the audience as his friends. Despite the lesser sound and the small stage, you notice that TDW & Dreamwalkers Inc. really belong on stage! During my interview with Tom I fired quit a lot of questions at him, about the creation of this album, about the live band and more. Tom gave extended answers. The interview (in Dutch) can be read here: