Hailing from Eindhoven-rock city, Netherland’s hottest Stoner and Sludge Metal outfit Komatsu has just unveiled brand new details about their upcoming and 3rd studio album titled ‘A New Horizon’! Set to be released on September 7th 2018 with Argonauta Records, Komatsu once again unleash an exciting mixture of Sludge, Stoner Rock and Metal while setting stones for a new horizon indeed. 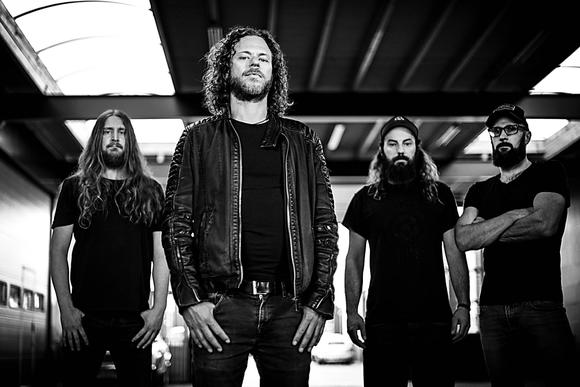 Komatsu was formed in early 2010, their years of musical experience in all kinds of bands before as well as their individual creativity created a brutal mix that left a huge stamp in the current Heavy Rock and Metal scene. The band released a self-titled EP in 2011, followed by numerous live shows all over Europe and writing material for their first full length album. ‘Manu Armata’ was released in February 2013 and been instantly well received by the international press and fans alike. It got raving reviews and Komatsu’s music style was compared to bands like Queens of the Stone Age, Torche, Mastodon, Monster Magnet and Karma to Burn. In 2014 Komatsu went on tour with none other than John Garcia (Vista Chino, ex-Kyuss, Hermano, Unida, Slo Burn) and played 32 shows in 13 European countries. In the summer of 2015 Komatsu recorded their second full-length album ‘Recipe for Murder One’ and toured Europe again with Nick Oliveri’s Mondo Generator.

‘Recipe for Murder One’ was released September 2016 and showed that the band gained trust and experience. It took the band on various tours throughout Europe with bands such as Duel or The Freeks. During May 2017 ‘Recipe for Murder One’ even took Komatsu to Brazil where the band toured for two weeks. After playing 85 shows in France, Germany, Belgium, Italy, Switzerland, England, The Netherlands, Brazil and Austria in support of the album ‘Recipe for Murder One’, Komatsu entered The Void Studio with producer Pieter Kloos in January 2018 to record their brand new album ‘A New Horizon’.

Says the band: „Recording this albums was a blast and it sounds like one too. Our engineer Pieter Kloos has outdone himself. A new horizon is a tale of escapism. The music is dark and lyrics even darker with a sarcastic twist. Join komatsu in their supermassive mothership in search of a new horizon!“

The tracklist for ‘A New Horizon’ reads as follows:

‘A New Horizon’ will be available September 7th 2018 on Argonauta Records (Vinyl/CD/Digital Download) and will mark their return to the world of heavy music, to once again smash the rock audiences and make sure everybody has a mothersludging time!