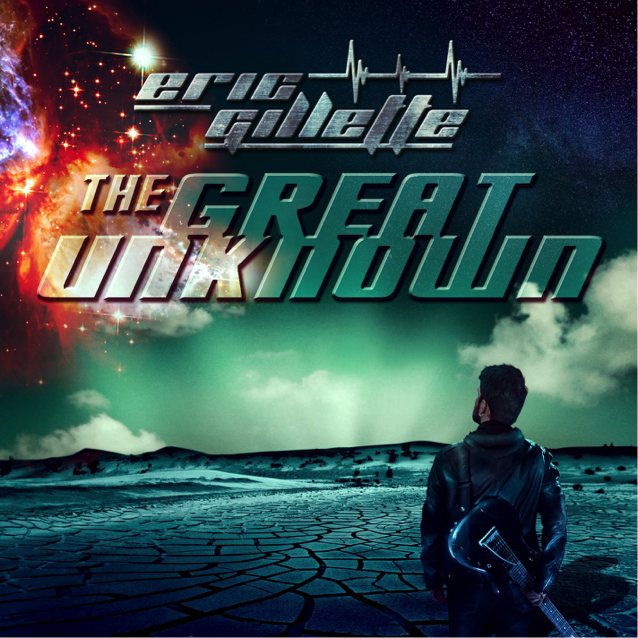 The name Eric Gillette might not ring a bell to everyone. Guitar freaks and prog-heads probably know his name as he is lead guitarist and vocalist in The Neal Morse Band. Eric started playing the piano at the age of four. Eight years later followed by guitar. He has since become a multi-instrumentalist. ‘The great unknown’ is Eric’s second solo album.

The CD opens with ‘The Great Unknown’. The song has a drum intro of a few seconds; after that the title track prologues nice and heavy. This surprising start has a balanced mix of rock/metal. A bit later, a squeez of pop is added. Eric’s voice is in harmony with the music, and he sings clearly, which enables you to sing along quickly. The lyrics are not too complicated. The instrumental part is quite upbeat, but the melody remains. Thomas Lang (Robert Fripp and Peter Gabriel) puts some nice dynamics in his way of drumming. This rocking song is well constructed. The rather unexpected end is tightly played.

‘Escape’ has a wonderful long instrumental intro, almost as if it would sound in the Neal Morse band, without being a copy! The decrescendo is fascinating. I’m touced, just only by the quieter music. The lyrics fit in well with this. Loosely translated, it’s about someone who is struggling with life. He sees that he wants to organize his life differently and needs help to get his life back on track. The music lingers on quite laid-back for a while. Then many musical notes and several twists and turns are fired at you rapidly. At some moments it feels like you’re on a roller coaster. But that is how life can sometimes be. Up-tempo from first rank, but again the melody remains. The melody also comes from keyboardist Diego Tejeida (HAKEN). The heavier sound comes from HAKEN fellow bassist Conner Green. Cool decrescendo with nice structure to the sentence: “It’s the end you’re finally free”

I am touched by the slower music and softer vocals. In the end, Eric sings with power, you can hear and feel his pain. The sublime guitar playing captions this. This great song ends after 18 minutes in a minimalistic way.
What an unexpected intro of Empty! I’m touched right away. Without looking to the credits, I hear immediately that authentic strings are used. Here played by Gideon Klein.

You can understand every single word Eric sings. His voice, the piano and strings are a perfect combination. A good build-up to multiple instruments. Strings and piano return, along with Eric’s voice. The ending is too unexpected. As if the last piece of this song is cut off.

The lyrics are, in short, about life and ‘survive’. For some it might be a source of inspiration, strength or consolation. Others may find it too sweet and/or pedantic. The booklet looks fine. If you read (listen) between the lines you will find a religious touch at some points. Most texts can be interpreted in different ways. Eric’s vocal range is not very broad but the beautiful color of his voice compensates this well. All seven songs are well structured and well balanced. At every spin you hear new things, for example in the percussion by Nick Magnuson. Sometimes you hear metal/rock, then you hear minimalist portions, alternating with bombastic parts. The sound is very good. As expected: a lot of sublime guitar work, without it being too much. In short, this album is easily fits in current top. (8,5/10) (Own Production)