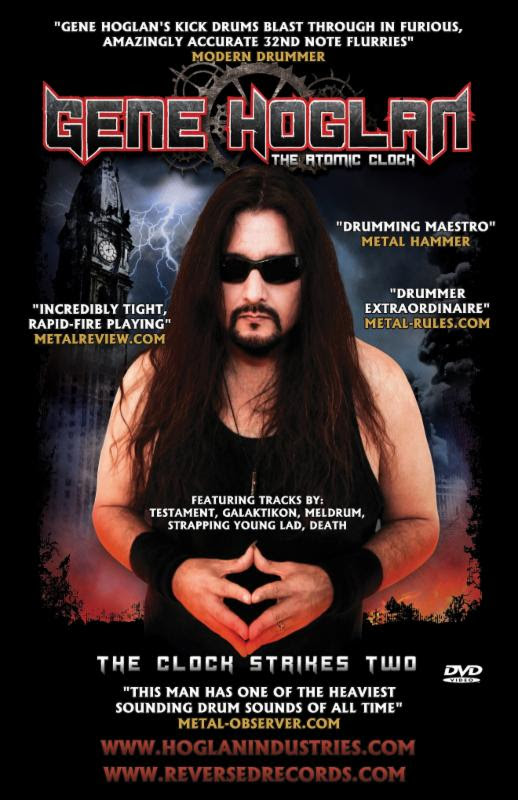 Gene Hoglan’s highly-anticipated second DVD, “The Atomic Clock: The Clock Strikes Two”, is due to be released in early 2017 and will feature the Clock himself breaking down some of his favorite beats, telling stories and playing along with tracks from several of his most legendary projects, including Strapping Young Lad, Testament and Death.

Limited, signed early release copies are available for pre-order now and will be shipped out in early December, just in time for the holidays! Make sure to pre-order your limited edition copy here in Canada and here in North America/elsewhere worldwide. Once limited edition copies are sold out, pre-orders will begin for the official 2017 release.

Filmed in high definition on a dozen cameras, with studio-mastered audio, this DVD offers a chance to see Gene Hoglan play like never before. Though certainly inspirational for any level of musician, The Atomic Clock: The Clock Strikes Two is not only for drummers. Gene’s easygoing, approachable attitude is readily apparent as he happily tells the viewer stories from his career, chatting as if with old friends about days in the studio or on the road.

An impressive roster of high-caliber musicians also weigh in over the course of the feature, offering stories about Gene and their experiences working with him. Interviews include Scott Ian and Frank Bello of Anthrax, 3 Inches of Blood/Revocation’s Ash Pearson, Jason Bittner of Shadows Fall, Chuck Billy, Alex Skolnick, and Eric Peterson of Testament, and more.

The Atomic Clock: The Clock Strikes Two was recorded At The Warehouse Studios Vancouver, Canada. The DVD was edited by Leon Melas and directed by Rob Shallcross and Leon Melas, with co-direction from GENE HOGLAN. All audio was produced, engineered and mixed by Rob Shallcross with audio mastering from Greg Reely.

GENE HOGLAN is currently performing with Testament on the road in Europe! Check out all confirmed tour dates featuring Gene below: