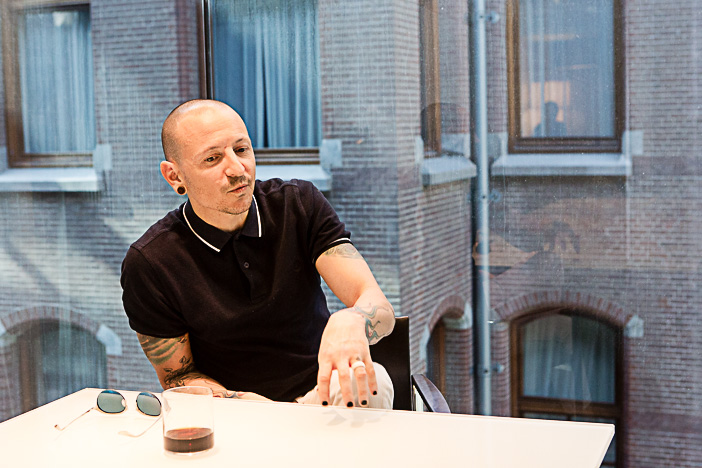 Linkin Park’s new album, ‘One More Light’, is set to be released worldwide on 19th of May. RockMuZine spoke with Chester Bennington, lead vocalist of Linkin Park, about the new album, the inspirations behind it and risky choices the band made.

When asked about the decision to bring a different sound and style to the new album, Chester went on to say: “Well, it’s not like we all sit down and decide the style we write the album in, or the amount of guitars to have, or the amount of synths to put in and so on. It doesn’t work like that. Moreover, nowadays all of the stylistic lines are becoming blurred. Just recently, I was listening to a radio and suddenly there was this beautiful melody, I thought it was so dope! And I’ve heard it before, so I started to think chaotically – oh, this is Depeche Mode or Coldplay, what is it, man. And it turned out to be Katy Perry’s ‘Roar’. And I didn’t know, although I listened to that song 17 million times, from all the places around. And I like that about music. I’m pretty sure people had a brain aneurysm when Metallica played with Lady Gaga, but I was very happy, I fucking love both Lady Gaga and Metallica. And if I had to promote our new album, the punch line would be like it’s the best album we’ve done, ever”. 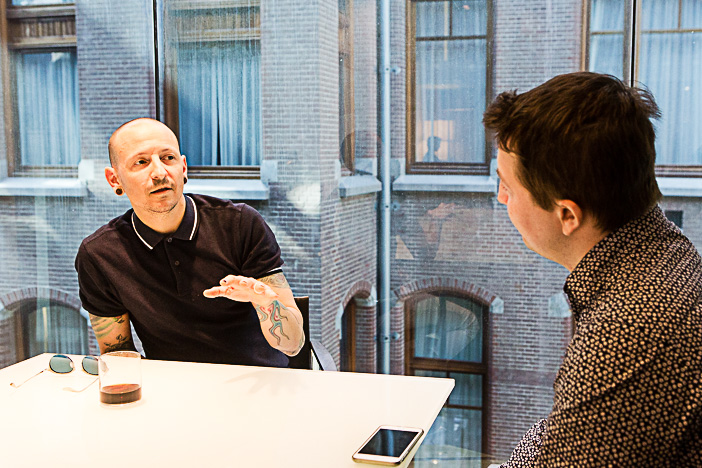 After the release of the first two singles from the new album, ‘Heavy’ and ‘Battle Symphony’, there was enough backlash on social media. Chester said he understands where it’s coming from: “I get it. Music is one of the few areas where people can get sort of racist, like don’t listen to this, don’t listen to that. And still not be considered fucking assholes. If you like metal and say everything else sucks – well, I guess you’re not a Linkin Park fan. And if you are – you’re gonna be among hundreds of others and each and every one of you will want something different. As different as this album may seem to the outside world, this record isn’t as different to me as to everybody else. Yes, it’s poppy and it’s different in that sense!”

Chester also recalled the days of Linkin Park’s debut album ‘Hybrid Theory’, when he disagreed with the choices of songs for it: “We had this really heavy record and then we had ‘In the End’ and ‘Pushing Me Away’. I was like, what the hell are these songs doing here, they make no sense. I didn’t care about ‘In the End’ back then and I didn’t like ‘One Step Closer’ either. At that time, I liked ‘By Myself’ and ‘Points of Authority’. I wanted to make a million of those songs. Luckily, I was not the only one calling shots. I was not writing music, but only lyrics. And I was very genre-ist back then. So there was no way I would agree to have ‘By Myself’ on the same record with this other song, ‘In the End’, which happens to be the biggest fucking song of ours so far! So, thank god, I’m not the only decision maker in the band. Being in this band helped me grow a lot, musically and stylistically.” 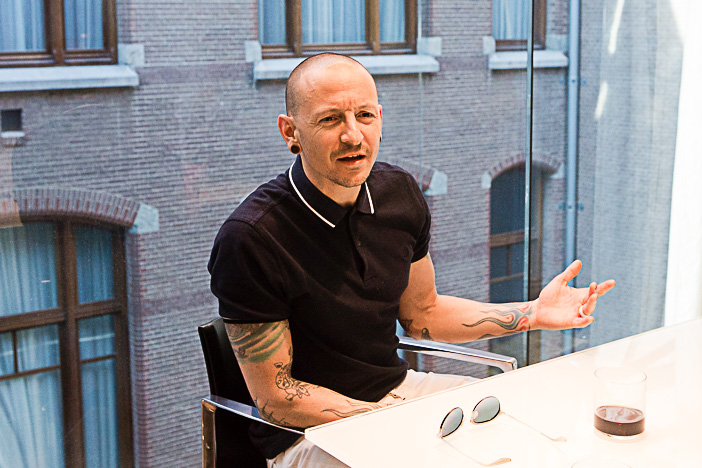 Calling the album ‘poppy’ seemed absolutely natural to Chester and he elaborated on the nowadays pop music: “Today, pop music isn’t as drastically different from alternative music as it was in the 80s. Or the 90s especially, when you had things like pop diva Tiffany (Darwish) and Depeche Mode, which were considered alternative rock back then. Nowadays Depeche Mode is making pop music. If you listen to their entire catalogue, which I know the entire thing about, it’s interesting they were ever considered a rock band. But because there was Tiffany, it had to be labeled as something else. I guess nowadays, for radio sake, there’s still a division. But it you take my personal playlist and shuffle it, you will get everything from Tex Williams to Meshuggah. There’ll be everything from jazz guitars to screams and growls. And that would be my radio station. Being able to find a way to fuse it all together is what we’re trying to do and this keeps us interested in making music and finding a way to express all the things we’re into.“

When asked if being a popular established band allowed them to experiment and go from alternative sound into pop, Chester said: “It would imply there was a choice to go into a particular direction. It would mean we had a conversation on what to do. In reality, the conversations that happened were more like ”Dude, I’m fucking drinking again and my relationship is not great. I’m fucked up”, and we could write about that. Or, you know, our close friend just died of cancer, we worked with her for a long time. So, let’s write a song about that. I could go like ”Man, my kids are so strong-willed, being a parent is so tough”. That’s how the record was made. And then all of a sudden, core progressions come, melodies and lyrics are being written. So let’s talk about kids, let’s talk about suicide, death, struggling relationship”. 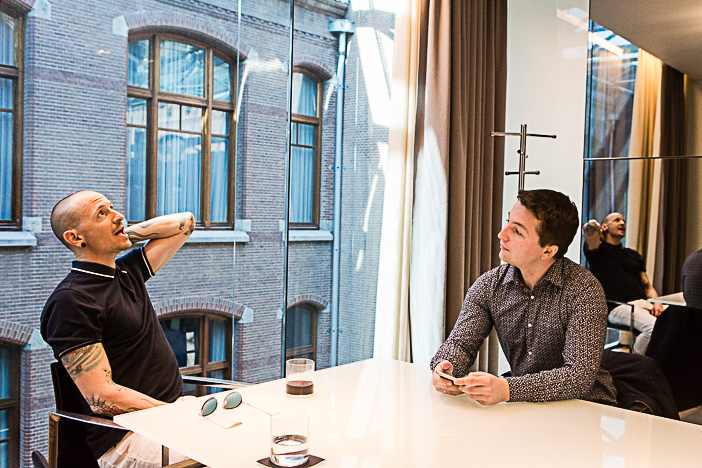 It does seem like ‘One More Light’ is a very personal album and Chester partially agrees: “All of our albums are sort of personal, we are always very emotional, we prefer to write about internal struggles. The main difference with this album comes from the way things were done before this album and with this album. Before I would come, meet Mike and Brad, they will have huge parts of songs done, very mature Linkin Park songs, I’ll have some demos written too and we would plunge into it. I would know straight on, that this is the song where I have to yell and scream, and there’s another song and so on. But what would happen if on that same day I would come and bring up problems I have with my strong-willed kids or my relationship? And I’ll have to tap into something, some experience, to write a song about it. So, this is not how I feel right fucking now, but this is definitely about experiences. And not only mine but everyone else in the band. So here we are, writing this record. Rick Rubin (producer) said it was a fucking miracle we wrote a record like that, with everything coming together, all the lyrics and melodies. So we were just talking about situations, as friends, and then writing songs about it.”

And indeed, the album sounds very intimate and very honest, and putting it together was a beautiful process. “We just had ideas, we had some core progressions, a lot of pieces, probably worth 40 songs. And we wanted to put everything together in a way that keeps the mood of it. And of course, we selected the most complete ones and worked with people who helped put some lyrics on it. It was very much like an interview now. You come with nothing, we work and in the end, you have the product, the interview. You don’t come with answers and ask me to sort them out. So we would talk, about life, about a friend who tried to commit suicide. Right, now you’re injecting it with reality, and now everyone can relate to it one way or another. You don’t need to be me to understand how that feels. Even if you can’t relate at the moment, you would go ”Shit, I feel for you, man”. Maybe that’s the perfect punch line of the album – ‘I feel for you’. It was a beautiful process, the album might have a shocking sound, but definitely not to me.”

So that proves the point, no matter what you do, if you stay honest and true to yourself, you’re bound to success, just like Linkin Park. Linkin Park’s new album, ‘One More Light’, is set to be released worldwide on 19th of May.