In run-up to the official release of ‘Feed the Machine’ on june 16th Nickelback is busy promoting the new album. On may 24th Mike Kroeger and Ryan Peake were in the luxurious Conservatorium Hotel in Amsterdam where they spoke to every interviewer in person; Maxazine was first up. The guitarist and bassist of one of the most known bands of the 90’s spoke about the writing process, a critical social view and working with Nuno Bettencourt.

The main focus is of course the new album. ‘Feed the Machine’ is the ninth studio-album of the Canadian band since ‘Curb’ was released in 1996. Nickelback has sold over 50 million records, every single record has been a great success leading them to win the SOCAN International Achievement Award five times. If the newest record is going to be a blockbuster has to be seen; the sound is not what we are accustomed to of Nickelback.

Not only the music is rougher and heavier than ever before, the lyrics seem a lot darker as well.
“A statement about the modern society… I think you can easily link with that” says Ryan. “Although we do like the idea that when we write (like ‘Feed the Machine’) it can stand for multiple things.
being fed what you want to hear that manipulation can apply on so many aspects of life: religion, politics, everywhere where people act with an egoistic motive. Though I don’t think it is an accusation to modern society, if you would play this a hundred years ago it would still be relevant. And that is exactly what we want. Delivering a message; think, don’t believe all the crap. That is not only important now, but has always been.”

“The lyrics match the rougher sound of the new record. What was not deliberate, says Ryan, but had everything to do with how he, Chad, was feeling the moment when he was writing or playing. I think that is always the we it goes when you are being creative, if it is writing, making art or whatever. This brought up so much aggression, it grew and grew and we shaped it this way. In the middle of the title track you hear machine sounds, grinding gears, the scraping of metal. I think we were more inspired by the oldskool metal, which ofcourse is what we listened to growing up.” The guitarist makes it really clear that they are definitely not a metal band. “I think that people who listen to metal will be very offended if we would be called a metalband!” jokes Ryan. “We started in the 90’s and you get labelled with a genre that they come up with in that timeframe. Bands start somewhere, but are influenced by certain types of music, automatically compared with other bands but constantly grow and evolve.
I myself listen Megadeth, Anthrax, Testament, Metallica, all the amazing old bands, and it is very funny; that what you produce, doesn’t necessarily have to resemblance with your musical preferences. Despite of the great examples all of the sudden you realise: Oh shit, we are no metalband!” 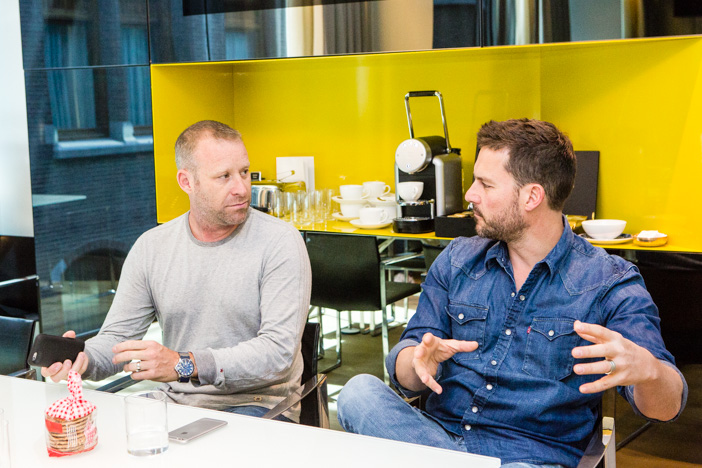 Mike joins us for the interview and talks about the growth of the band. “I think, (well at least hope) that we all have gotten better at what we do in the last twenty years.” According to Mike “Chad has certainly become a better songwriter”. The new album is in that way a great representation of the growth of the band. Mike doesn’t have a real favorite on the record “I love the silence between the songs” and laughs the loudest at his joke. Ryan does have a favorite “the last song that made the cut, ‘For the River’, that was such a good one.” After an enthusiastic remark about the technical guitar play he smiles; “Yeah, awesome right? That was Nuno Bettencourt!” Mike continues. When Chad was playing him a sample of the song to mike, the bassist remarked that it had that typical Bettencourt sound. Chad instantly sent the song to the Extreme-guitarist, and this is when Mike grabs his phone. “I still have Nuno’s answer”. He responded to the sample with “That’s my shit, man!” Nuno recorded the solo and is responsible for several guest appearances on the album.

Another interesting story emerges with a different favorite of Ryan, ‘The Betrayal (act III)’.
He describes it as a play-off between Chad and him. “I wrote the music of ‘The Betrayal (act III) and went on a vacation. Meanwhile Chad wrote real aggressive lyrics to add to the chorus, and I would listen it online and it was so cool. The lyrics really tell a story. He thought about it and said; what was the biggest betrayal? That of Judas, probably, so it is that betrayal that the song is about. Chad also suggested to, among others to make it more interesting, to call it ‘act III’ because mostly the betrayal happens in the last act. A little later I was still writing, it was a little bit classical and felt like an intro; it seemd more like the first, innocent act so we put in on the album under ‘Betrayal (act I)” explained Ryan.

The men of Nickelback talked a lot and there was, between all the seriousness, time for laughter. Even though there is now only an American tour it is most likely that there will be an European tour in the near future. Make and Ryan are stoked to be going on tour again!

Photo’s (c) Armelle van Helden
Thanks to Samantha Hol for the translation.