What a day, what a trip! Together with my local Glam bro Marc and my German Hard And Heavy brother Maurice we made a journey by car, to the deep South of The Netherlands, to see and meet the mighty Swedish Melodic Rockers Treat in real life. But first a hell of a funny road-trip, but who cares…. When we arrived the beer was served and cold and the friendly promotors Ludy and Theo from Eternal Rock Concerts lead us to the backstage area to meet our youth heroes from Sweden. So here we go Rockers! 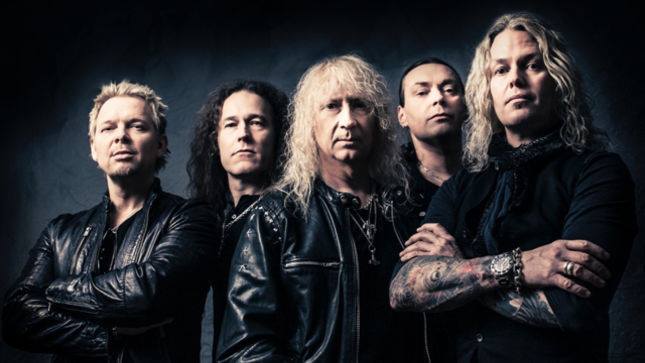 Guys, how does it feel to be on the road again right now?
Patrick: Wow, it actually feels really really great. It was some time ago, at least when we’re doing this on the road. Being on tour in Europe like this. The last time was 2010.

Yes I saw you with The Poodles and HEAT in Belgium.
True, time flies. It was really really great being out there. The audience was great and now we have a new album out and we are really really proud of it. Being out playing the new songs was great. This band is going on since 1982 and we have many anniversary’s coming up. So there is a 30 years anniversary coming up. It’s terrific and feels really really good.

The new album sounds really good.
Yes, you think so? Yes we are proud of it, and we focus on new songs. We’re really happy with it and took a new producer to record it.

Yes we are really happy that you keep the old Rock sound and don’t get too modern.
We need to, because that’s Treat!

The production is more modern, but music wise it’s still old school or classic Treat.
You cannot compete with yourself and do the next ‘Coup De Grace’ or the next ‘Organized Crime’ or whatever, you’re in that state of art moment when you’re doing that album and try to do it the best way you can and make the best of the songs. There are a lot of musical influences within the band and that’s our style (melodic). We’re all very good musicians who are doing melodic Hard Rock.

Do you prefer small Clubs or playing Festivals?
It doesn’t matter. As long as we have the people in the audience who like the music. It’s not easy to do festivals these days, because it’s much harder to get gigs.

Everywhere!
Festivals is much different than being on tour on your own. Sometimes it’s much more fun to play in a club. Because it’s more intense.

Your current Album is highly appreciated by the Rock/Metal Press and by the Fans. How do think about it?
We’re really happy about the high appreciation. We’re very proud of the songs and see the fans love the songs. It’s a lot of work. Even though it’s much easier today to record an album, it’s still a lot of work.

Is the Way You Record an Album, Write Songs, go into the Studio etc. still the same in 2017 as it was back then in ’87?
There is a big difference. Back in the old days you could rent a big big studio for 8/9 weeks and live there.

I saw the story of Bruce Dickinson talking about the recordings of the Iron Maiden – ‘Somewhere In Time’ album, so I know what you mean.
Yes you live in the studio and you’re doing recordings, the thing is: We still do everything live today. It’s all live but everyone is doing their part on his own, in his own studio at home etc. Our heart is still in the old days but it’s not common anymore, living in the studio like back in the 80’s. 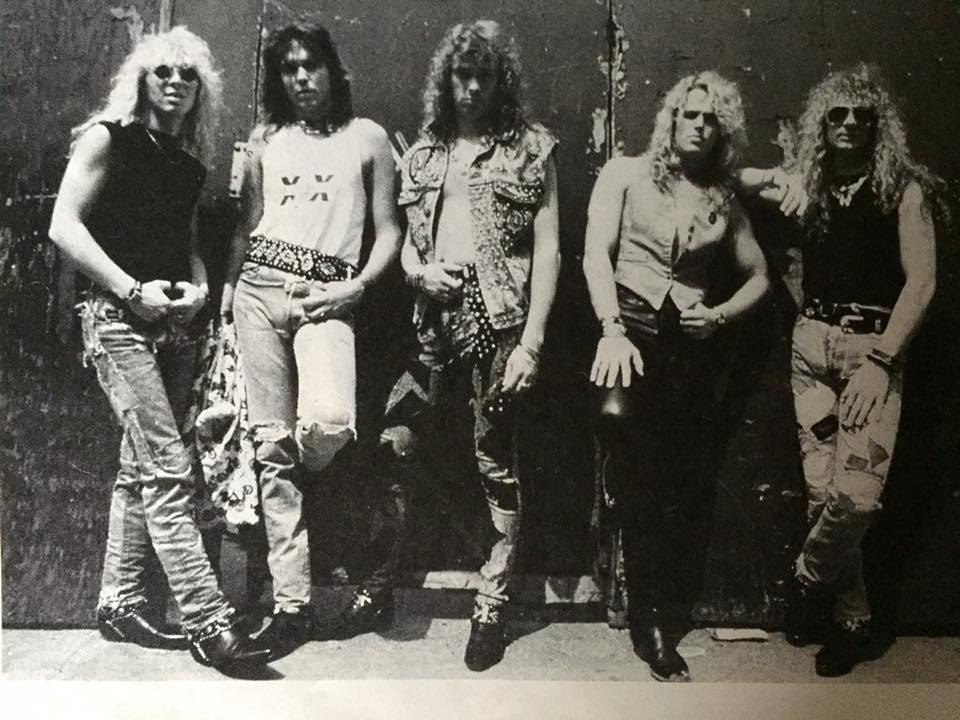 How do you see the Melodic Rock/’Hair Metal’-Scene right now? Is there the same Enthusiasm as in the 80s? Has the Audience changed?
Both I think. We see a lot of youngsters at our shows, even in Japan you see some diehard fans and some new fans. It’s just like my daughter discovering the Beatles. It’s really cool.

In Sweden there is still a huge Rock/Metal Scene composed of all Genres and a lot of Bands are around. Do you see Bands as Eclipse, H.E.A.T., the Poodles etc. as the Future of Melodic Rock as you and Europe e.g. started it back then?
I think there are a lot of bands following us: HEAT, Eclipse and all those bands are great. It’s great to see all these young bands playing this kind of music and it’s not gonna end with us. That’s very good for the audience.

I remember well the cool Video to the Song “World of Promises” when it got huge AirPlay Even on German Mainstream TV around ’88. What do you remember of that time? Any cool Stories? What happened to the Model in it?
Talking about the “World Of Promises” video, still I was not in the band, because I started with the “Organized Crime” album back in ’89. So let’s give the word to Jamie, our drummer.

So Jamie what’s your story behind it?
It’s 30 years ago, so I don’t remember much of it haha, but let’s try. We shot it in Vienna and we had this penthouse play bunny girl. We actually shot the video in a club. We built the stage and everything in a house. It was a lot of fun, it was the 80’s haha. It was good making it, 24 hours.

So it was nice to have 24 hours a nice lady around you, right?
Yes, when we did the shower parts, we all kept standing around haha. Well we kept standing around, even when all the live taking was done, not to miss anything, we were in our twenties haha.
She was a nice girl, as a person too. Her boyfriend was a famous boxer. So we were looking from a distance haha. We knew everything about the boxer, sneaky haha.

You didn’t play Tilburg…. ??? I was there but no Treat… First concert I ever visited and not you on stage….
We were there and wanted to enter the stage but the organisation told us that we were running out of time and so they kicked us off the bill in Tilburg, because we were late. We were the 1st band so we got kicked off.

So I was ten years old and so missed my chance to see you in the 80’s!
In Schweinfurt the same was about to happen (late again), but we played and that was the first really big show for Treat and it was awesome and good fun! Cause we had the album out and we were on the bill with Kiss, Iron Maiden, David Lee Roth and all our big heroes. On the same stage as Kiss, Wow!! We were brought up with Kiss, signed to Polygram like us. They had the same press stand like us, and same hotel. We stayed at the Hilton Hotel in Schweinfurt. Crazy

In which hotel did you stay in Tilburg? I lived around the festival area at the time.
No idea about the Tilburg hotel, but in Schweinfurt we were standing at the desk with Paul Stanley and took a picture with him. Like little kids, but they were very nice to us.

With one of my favourite drummers Eric Carr.
Oh yes, he was a really nice person as well. Really down to earth. It was good fun. We got to talk to David Lee Roth and he was blablabla talking all the time haha, funny guy!

You presented the “Dreamhunter” record from ’87, so you played a lot from that record. It’s still one of my favourite melodic Rock albums ever! I have the vinyl original since I was a kid.
It’s gonna be re-released as a 30 years anniversary edition. Remastered and everything in great shape on vinyl. We add some rare pictures and extra’s on it. It’s gonna be great! Out around June 2017 on Universal Records.

What are your Future Plans? New Album coming up?
We don’t know yet. But we are releasing a live DVD and a live album coming out, late April 2017. The DVD was shot in Milano last years at the Frontiers Rock Festival. So no further plans yet, but we are always writing music, so let’s see.

I talked to Patrick that all the Treat stuff keeps the old traditional sound.
That’s our sound and so never big changes will happen. This is Treat!

What were/are your Musical influences? Do you listen to current music?
Some of us are really into Pop music, some really into Rock music and Patrick even works for Universal Records. And to be honest to me, I cannot listen to Rock music when I play it. So back home I listen to a lot of Motown and 60’s music. To get down I need a different kind of music. I always listen to a lot of other styles of music. Michael Bolton, Brian Adams, stuff like that. We just have a lot of different influences in this band.
You also like some more heavy bands?
Not me actually, it’s more Pontus, our bass-player who listens to heavier stuff. A lot of Progressive stuff. So when we come all together, that’s the Treat sound!
What would you recommend to a Hungry new Band that wants to get Rocking in the Music Business?
Well, it’s always songs and music. Focus on the songs and material. Cause a good song is always a good song. Write songs to remember. A catchy song is the most important of all, besides looks and stage acting etc.
You miss that in new bands.
You answered the question yourself. A good catchy song is the big secret. Stick to writing good music and people will remember. A good song is always a good song.

Thanks, Guys, and have a great time!!!
-Same to you guys, enjoy our show! 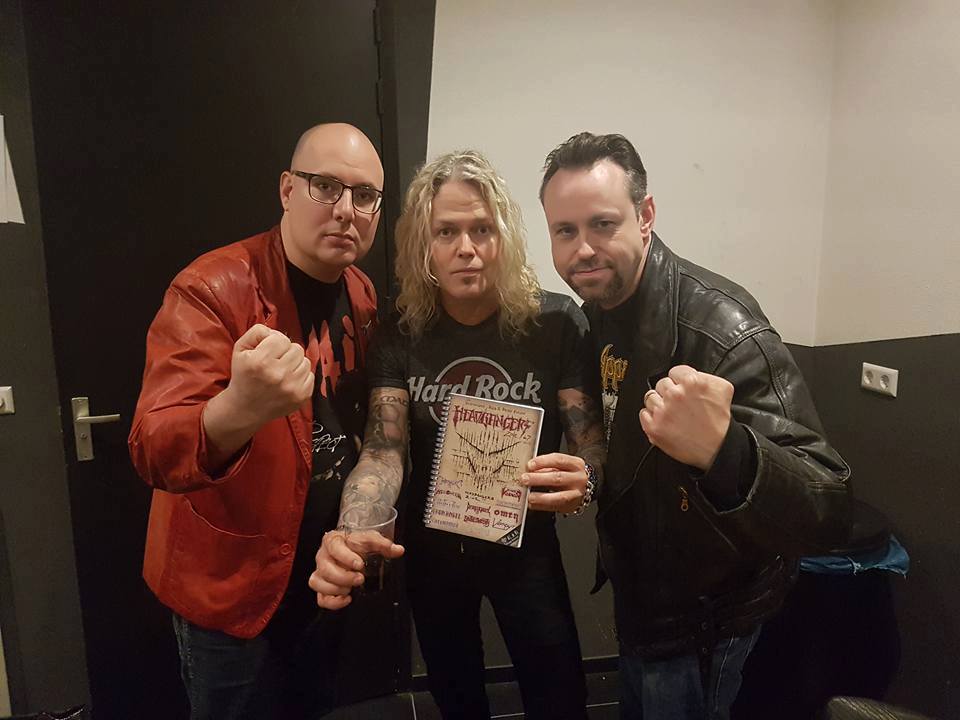