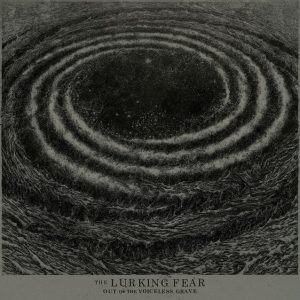 The Lurking Fear (made up of At The Gates, The Haunted, Disfear, Skitsystem and God Macabre members) building upon the momentum created by the release of a self-titled 3 track 7” are due to unleash ‘Out Of The Voiceless Grave’ their full length debut on August 11th. The term “supergroup” is thrown around all too often these days and rarely, truly, applies. But when an outfit is made up by some of death metal’s heaviest hitters and bona fide legends then it is only natural to expect something genuinely exceptional. And ‘Out Of The Voiceless Grave’ is just that, exceptional. A modern slab of old school death metal that forgoes needless over technicality and instead focuses on aggression, atmosphere and mood.

Call it what you will “supergroup” “side project” regardless of labels each member of The Lurking Fear has brought their A game. Tomas ‘Tompa’ Lindberg sounds a guttural as he ever has without resorting to a cliché growl. While both Stålhammar and Wallenberg have created classic death metal riffs tinged with moments of thrash and even a little black metal. Axelson and Erlandsson provide a steady, pounding rhythm section throughout which acts like a pulse that ties the entire record together. Another noteworthy aspect to the albums credit is production. Crisp and clear, it still manages to retain the rehearsal space rawness with Per Stålberg managing to capture The Lurking Fear at their most visceral.

Each of ‘Out Of The Voiceless Grave’ 11 tracks, there are 12 in total the first being an instrumental, stands entirely on its own feet and there are little (if any) low points to be found across its 42 odd minutes. Personally I feel ‘Teeth Of The Dark Plains’. ‘Tentacles Of Blackened Horror’, ‘Tongued With Foul Flames’ and ‘With Death Engraved In Their Bones’ best encapsulate what The Lurking Fear are all about but again, that is just personal opinion and this record is quickly becoming a highlight of this writers 2017.