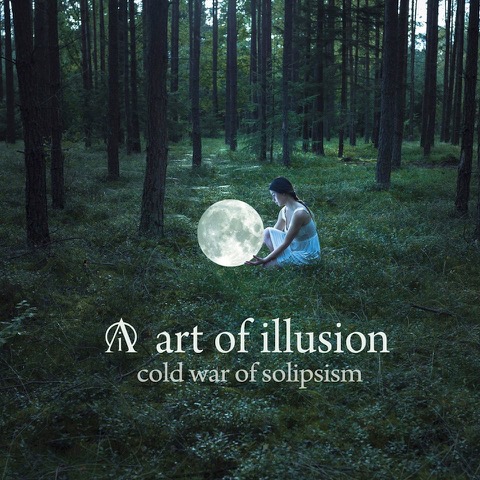 Art of Illusion has been around since 2002. Yet, this prog rock/metal band from Poland has just recently released their second album. Because of major setbacks their first album released just three years ago. Fortunately, their road to ‘Cold War of Solipsism’ was a lot easier. Art of Illusion has joined the stage with Dream Theater and Anathema, among others.

‘Ico’ is a dreamy instrumental song with some classical elements. ‘Devious Savior’ is a lot heavier right from the start. The vocalist Marcin Walczak has a very unique sound. but it might be not everyone’s cup of tea. His pronunciation is not perfect and he also stretches some words. That’s making him hard to understand. The booklet with the lyrics is simple, but easy to read. This makes it easy to read along. The heavier sound creates a beautiful contrast with the lighter elements. The transitions are good. Filip Wisniewski has a fine guitar sound, beautifully accompanied by a wonderful rhythm section. After a slightly chaotic part, the end is tight played.

The first part of ‘ Allegoric Fake Entity’ has a jazzy vibe. With its very low tones, it seems as though they used an upright bass to contribute to this sound. After a couple of changes in style, the music becomes a lot calmer. Marcin’s voice makes it pleasant to listen to.

Tempo and volume increase, and so does the amount of emotion in the vocals. The piano (played by Paweł Łapuć) runs frivolous through to the heavier music. The way the songs build up, and the way the musicians play together is surprisingly well. The layers of the compositions are fantastic. For instance, the beautiful mix of keys and strings in ‘Santa Muerte’ stands out in a positive way. There are numerous transitions within the tracks, both in rhythm and volume, as well as in the general atmosphere of the music. The more powerful parts (clearly with metal influences) are sublimely changed to lighter parts.

The instrumental bits are very strong. The characteristic of Marcin’s voice is sometimes a little sharp. That becomes clear in ‘Able to Abide’. This marvelous track unfortunately fades out. “Cold War of Solipsism’ starts with acoustic guitars and some cymbals here and there, until the tempo and the volume are increased. The alternation between soft and heavier sound is also present in this song. The piano swirls kindly amongst the heavy strings/
Drummer Kamil Kluczyński changes the rhythm quite frequently. The rhythms sometimes appear to be a bit strange at first, but they are certainly interesting. There is a lot to pay attention to, and you keep on noticing new, interesting things. Like mentioned, the tempo changing frequently and the superfast played guitar is adding a wow-factor to it all.

Nearing the end, Marcin lets out a cool ‘scream’. This is a well-chosen title song:: it’s a fantastic track! ‘King Errant’ is the last track on the album, and again I am impressed by the structure. The grunting, on the other hand, is less impressive. The calmer part that follows this is beautifully played. The music fades out. This could have been done better. The choir at the end is surprising and adds well to this amazing CD. Art of Illusion offers us a lot of variation and contradiction with their album ‘Cold War of Solipsism’. They made the tracks in such a way that the whole is a harmony. Never heard of Art of Illusion? look at their Bandcamp page. This beautiful prog from Poland deserves more fame, because these seven tracks are amazingly solid. (82/100) (12 Sounds Production)