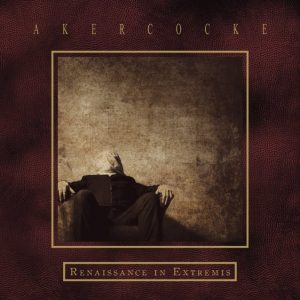 No suits? No Satan?? NO PROBLEM!!! After 10 agonizing years of silence, Britain’s finest progressive blackened death-merchants Akercocke have dusted themselves off and returned with a vengeance. ‘Renaissance in Extremis’ the groups 6th full length, their first since the release of ‘Antichrist’ way back in 07, is quite possibly their most focused effort to date and is due for release on August 25th A quick glance at the groups press shots and one will notice the absence of bathykolpian females, expertly tailored suits and Hammer Horror aesthetics but fear not dear reader ‘Renaissance in Extremis’ is 100% Akercocke.

‘Disappear’ opens proceedings and within seconds one is pummelled into submission. A violent 30 seconds of blasting and a brief solo courtesy of returning, original member Paul Scanlan make way to a galloping trashy riff and we’re off. 7 minutes of gloriously crafted progressive Death Metal in the midst of which we are treated to a haunting 80’s style passage reminiscent of the more gothic moments of The Cure.

Vocalist/Guitar player Jason Mendonca has spoken much since Akercocke’s reformation about bringing a sense of positivity to the band’s sound and especially to their lyrical approach. This is apparent in ‘Unbound by Sin’ and the truly phenomenal ‘Inner Sanctum’ (a song about cognitive behaviour therapy) proudly encouraging us in the former to “achieve your goals” and that “the sanctuary is in my mind” in the latter. The marrying of metal and positivity hasn’t always worked (see St Anger) with such aforementioned topics often running the risk of sounding clichéd or preachy. Not so here and when coupled with moments of blistering musical aggression and fearless experimentation Akercocke convey these themes masterfully.

‘Familiar Ghosts’ opens with the sound of waves gently breaking upon rocks, a subtle riff and lush orchestration. Here, Mendonca’s clean vocals sound especially powerful as he switches from a melodic croon to a more vicious growl. ‘First to Leave the Funeral’, a track that while certainly appeal to long-time fans, bears all the hallmarks of what has made Akercocke one of the finest progressive metal acts in world today. Multiple tempo changes, breaks and quick fire drumming (David Gray showing why he remains one of the best in the business) and even some hammered dulcimer for good measure. Again Mendonca shines as he wails “Place my hands, gently over your ears to save you the sound of screams!”   The album’s 9th and final song ‘A Particularly Cold September’ is a dizzying mix of delicate finger picking, soft jazz saxophone and old school Death Metal. Think ‘In the Court of The Crimson King’ meets Death ‘Leprosy’. But Akercocke don’t just stop there, adding some “classic rock” style guitar work to the final third of this absolutely mammoth track.

‘Renaissance in Extremis’ showcases an Akercocke reinvigorated, no doubt aided by the addition of bassist Nathanael Underwood (Dām/Damim), with each member bringing their absolute best. Expect to see ‘Renaissance in Extremis’ atop many an end of year best of list as this is not only the front runner it is also one of the finest records they have ever released.