Britain’s Akercocke, having reformed and released one of the finest records of recent memory ‘Renaissance In Extremis’ have been riding on the crest of a wave. Tours, music videos and nary a bad review in sight, founding member David Gray took time out of what is undoubtedly a hectic schedule to answer some questions. 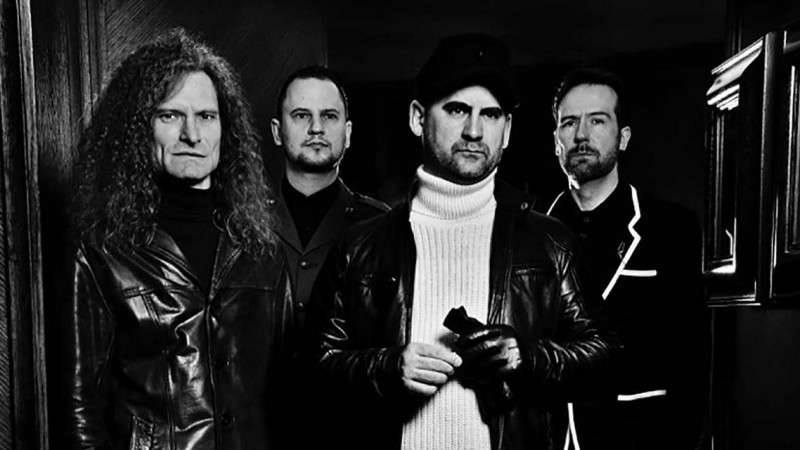 Greetings David. First of all, a massive thank you for taking the time to answer some of my questions today. ‘Renaissance In Extremis’ is out, the reviews have been great and you are touring again. How is everything in the world of David Gray at the moment?
Everything is great thank you, very busy, which is good.

‘Renaissance In Extremis’ is the first Akercocke record in a decade and it’s an absolute belter! Was it difficult to get back into Akercocke mode? How was the writing and recording process?
I’m very pleased to be back in the Akercocke zone as you well know, getting the band back together again after so long is amazing and the new album was an absolute joy to compose and record. Jason had material from after the ‘Antichrist’ album that was intended for the next Ak album that never happened so we revived that stuff just as Matt Wilcock and I did with his songs that didn’t make it to the Ak album for the ‘Antichrist Imperium’ first album. Paul had material that he had been working on and it all came together very quickly – then working with Steve Long to record it all was an absolute treat.

I had the extreme pleasure of catching Akercocke recently when you came to Dublin with Hecate Enthroned as support. In general how as the live fan reaction been?
It’s been overwhelmingly positive and everyone is so pleased that we are back wherever we go, it’s been incredible.

Since it’s release, Akercocke have been playing ‘Renaissance In Extremis’ live in its entirety. What inspired you to recreate the album on stage, and will the older songs still find a place in future set lists?
Personally I don’t really agree with playing the whole new album in its entirety but I was just happy to do whatever the chaps want to do. I’m just pleased to be back in Ak and back on the road so I’ll play whatever they want! Personally when I see a band live I want to see the hits, like if I saw AC/DC and they didn’t play ‘Black in black’, ‘Highway to Hell’ etc then I’d be pissed right off coz I don’t really care about the latest songs that much yet, but that’s just me.

In the past the role of lyricist primarily fell to you. Jason {guitar/vocals} has contributed quite a lot to ‘Renaissance In Extremis’ Did this come as a relief or did you have difficulty loosening the reins as it were?
Jason didn’t want to have any Satanic content to the lyrics anymore so I had to create something a bit different for my contribution. I only wrote three songs, I think? A few lines here & there for a couple of others – I don’t have as much creative time as I would like for lyrics anymore to be honest so I guess it was a pretty convenient situation all round.

I’d like to speak a little about the other projects you’re involved in, The Antichrist Imperium and Voices. What can you tell us about your upcoming plans?
Well I can confirm I have most definitely been writing Satanic lyrics for The Antichrist Imperium! But again Sam Bean has helped out a hell of a lot with his lyrical contribution as he has had a much larger contribution in general to this second release. Dan Abela is back in control of the mix and it’s all coming together for the last stages before it’s mastered back in Australia with heavy metal genius Matt Wilcock overseeing. Matts come up with some of the strongest material he’s ever written this time, I’ve been working with him over ten years through The Berzerker, his time in Ak & now The Antichrist Imperium and I can confidently say he’s upped his game with composition, arrangements and absolute devilry of the highest order. I can’t wait to hear this beast finished in its entirety. Also the new Voices third album will be released in the spring; it’s a further deviation from the ‘London’ sessions, even further away from the black metal template that the band started from.

Does juggling 3 bands that produce such extreme music ever become tiring? Or could we someday hope to see Voices and/or The Antichrist Imperium supporting Akercocke?
Working full time and juggling three bands is very very tricky but it’s so creatively rewarding that I wouldn’t want it any other way. Creating heavy metal is such a part of my personality and self-esteem that it is integral to my existence; I would quite honestly be nothing without it.
Voices recently supported Akercocke in Iceland and Matt Wilcock and I played in The Berzerker AND Akercocke on an Australian tour back in the day so anything is possible.

One final question David before we go. Where do you see Akercocke progressing from here? A thoroughly triumphant comeback: ‘Renaissance In Extremis’ and the entire band seems reenergised and refocused. Surely there is more to be written in the Akercocke tale?
Jason and I were both in agreement that our album before the hiatus ‘Antichrist’ just didn’t feel like the ending of the final chapter of the bands biography. So I am very pleased that at least if it all falls apart tomorrow then we have a suitable epilogue to the story of the band and creating the Ak book with Sean Keatley and Jason Repantis for the special edition really was a life affirming experience. But the intention is for the band to commence writing another album so I really look forward to that and I would love to carry on recording and playing for as long as Jason and Paul want me.

And with that David I shall take my leave. Once again a massive thank you for taking the time to speak with me today and as always I leave the final words to you.
Thank you and all the Ak, Voices & The Antichrist Imperium enthusiasts everywhere for all your support and positivity – I truly appreciate it all and feel very grateful to be part of the underground metal community.

‘Renaissance In Extremis’ is available now through Peaceville Records and digitally via Bandcamp.