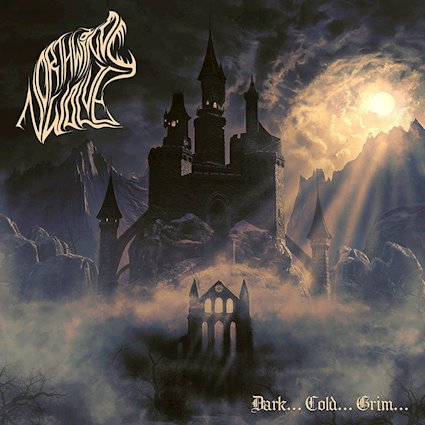 Via BlackLion Records the band Northwind Wolves releases their debut album ‘Dark… Cold… Grimm…’. The band from the American state of California first started as a project between singer / guitarist Noor and guitarist Astaroth under the name ‘Sinstorm’. This project had many line up changes, but it was not until drummer Brett Batdorf was added to the line up before the three guys started to take a different route within the Black Metal sound. The gentlemen started experimenting with different styles, as did their sources of inspiration Dissection, Old Man’s Child, and the earlier work of Dimmu Borgir. This resulted in the new band name ‘Northwind Wolves’ and their first debut album ‘Dark … Cold … Grimm …’

The album opens with the intro of a gust of wind as a sound effect on the track ‘Dark Skies For Black Sorcery.’ The music on this opening track clearly grasps the atmosphere of the album cover with a dark and doom-like sound. Nevertheless, this track does not immediately bind the listener. The further musical course sounds much the same, and the grunts and screams do not bring any variation there. The piano outro, however, is surprising. The second track does know how to arouse this curiosity. ‘Specters in the Funeral Mist’ is an excellent track. The band knows how to combine the keyboard sound well with a nice guitar solo. The song ‘Cold-Hearted Kings or The Occult’ does know many symphonic influences as evidenced by the combination of common instruments such as piano and violin. Still, the track still has little to offer because the screams don’t add anything good to the track.

At ‘Last Light Before The Frozen Darkness’ attention is weakening. There are frequently some sound effects such as nature sounds and a roaring smile as an intro, but these sound effects come across as a gimmick, which is a bit irritating. The piano sound in the background also sounds very monotonous. The track hasn’t got a clear beginning and it also ends abruptly. It is only at ‘Entrance To The Dark Universe’ the band regains the attention. The solid guitar work has a nice tempo, and this time the vocals are clearly alternated. With a combination of an organ, guitar, and piano outro, the band manages to finish this track nicely. The band knows how to keep the attention on the next track ‘Majestic Fog On The Everlasting Mountain’, because the track has the same structure as its predecessor.

Alas, at ‘Chamber of The Shadow Land’ the attention is weakening again. The band knows how to build in an interesting keyboard sound as a bridge, but because the track ends abruptly, this causes a disappointment again. Can the last track still make up for it? Unfortunately not. The closing ‘Celestial Extinction’ sounds very boring, predictable and ends abruptly. “Bang, boom!” “Pack up, and get the train quickly,” it seems.

In first place there is nothing wrong with the production of the sound and vocals. It has clearly been decided to keep it as organic as possible, for which the gentlemen earn credits. But unfortunately the album sounds rather smooth, because many tracks have no clear beginning, and often end abruptly, to go straight to the next one. Also in terms of variety in sound and vocals, there is little to be noticed. By using too much sound effects as intros, it causes the irritation rather than actually adding something to the tracks. Too bad, because even if you choose to keep the production as organic as possible, you can still pay attention to the building and finalizing of the tracks. And for this album unfortunately it did not happen. (60/100 BlackLion Records)