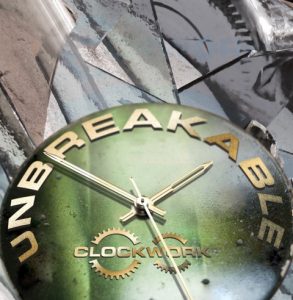 Clockwork is a Dutch symphonic progressive-rock band that was founded ten years ago in Brunssum. However, the EP “Unbreakable” is only their second official release so it is not surprising that I only recently heard of the band Clockwork. By coincidence I have heard their music on the internet which sounded really good. This is one of the reasons I gladly write a review for them. Clockwork, which consists of four band members, does not have a lead vocalist for quite a while. On “Unbreakable”, Jan Willem Ketelaers (known for his work with Ayreon, a.o.) is featured as guest vocalist.

The EP opens with the title track which has a nice and aggressive start. The aggressiveness is turned down slightly just before the vocals begin. Jan Willem has a clear pronunciation of the lyrics which allows him to emphasize certain words and/or syllables. The music consists of multiple short symphonic sequences and light piano elements which are in good contrast with the heavy guitar work. Ivo Cleven shows very dynamic drum work several times during the song. Everything combined makes “Unbreakable” an excellent opening track.

The second track “Subject to Change” starts immediately which makes it feel like a continuation of the previous song, however it quickly becomes clear that this is a completely new song. With a good build-up, you can feel when the song is about the end. “Test of Time”, which is an instrumental song, also starts immediately after the previous song. The break before “Daughter Earth (2017)” takes a little longer. The intro plays with a stereo effect shifting the sound slowly from left to right. This however could have been more exploited. There is a good balance between the violins and the heavy parts played by guitarist Bas Welling and bass guitarist Sjon Bremmer. Overall, this song is quite varied from heavy parts (Metal influences) to catchy melodies (Pop influences) to a completely acoustic part. Especially in the acoustic part the vocals of Jan Willem truly shine.

After 25 minutes, this EP ends far too early. The symphonic parts could have been more pronounced and more frequently present in the songs as the band profile themselves as a symphonic progressive rock band. There are some additional positive points to mention. Remy shows us a big variety in keyboard work: Light and fast piano work, electronic sounds and dirty/heavy organs. Furthermore, Bas shows a wide variety of guitar parts, from screaming lead guitars to supportive background parts. Both Remy and Bas are accompanied by a solid rhythm section. Last but not least, the vocals of Jan Willem deserve a big praise as well. Hopefully, Clockwork’s next release will be a full album. In conclusion, the EP “Unbreakable” deserves to be played loud!