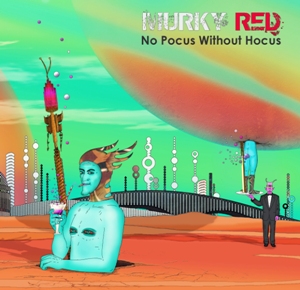 The Belgian prog rock band Murky Red was founded about seven years ago. Over a year ago, they released the digital version of their second album ‘No Pocus Without Hocus’. Of course they also wanted to launch a physical album , but their budget was too tight. Meanwhile, guitarist Patrick Dujardin and bassist Luk Lantin, partly due to time issues, left the band. This makes Murky Red for the time being, a studio project. But never mind. They have still managed to launch a hard copy.

Stef Flaming is now bassist, keyboardist and guitarist. The lead guitar is partly replaced by synthesizer. As a result especially ‘Pixelated friends’ and ‘Stoned & Horny’ are surprisingly different. Guitarist Colin Tench (Corvus Stone) is a guest musician in ‘Collateral Damage’. He also did the mix and mastering of the album. There are three bonus tracks added. So, this limited edition of ‘No Pocus Without Hocus’ (under the label of Melodic Revolution Records) extra special. The artwork booklet is rather thin. That’s not a big problem. Many prog heads are still hard copy lovers. They had to wait for almost a year, but it’s worth the wait!! (8,5/10, Melodic Revolution Records)