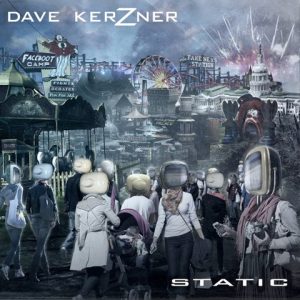 ‘Static’ is the second solo album by singer and multi-instrumentalist Dave Kerzner. His debut album ‘New World’ received praise in the prog world. ‘Static’ is a concept album / rock opera. In short, this concept is about the individualistic society. Making unfounded judgments, giving blunt criticism are a few elements that are discussed.

‘Static’ is the second solo album by singer and multi-instrumentalist Dave Kerzner. His debut album ‘New World’ received praise in the prog world. ‘Static’ is a concept album / rock opera. In short, this concept is about the individualistic society. Making unfounded judgments, giving blunt criticism are a few elements that are discussed. ‘Prelude’ contains some tones of gloomy piano playing, but this touches me immediately. After this short track of less than 40 seconds, ‘Hypocrites’ follows. Almost immediately there is a lot going on, including drumming with lots of dynamics. The lyrics make you think. Some parts are sung in staccato and this fits well with the music. At other times the vocals melt together with the music. The twists are smooth as well as unexpected. All layers are in harmony. And the sound quality is very good. The build-up to the tightly played end is cool.

Some parts of the title track almost sound simple. Yet the whole thing is complicated. I am so focused on listening that I forget to review. Song and music take me up several times. ‘Static’ ends with a crackling soun’Trust’ touches me within seconds. The atmosphere is a bit depressed, yet you can sing along with certain parts quite quickly. The cello subtly underlines the gloom. This is a beautiful and sensitive song; to the last, soft note. ‘Quiet Storm’ turns nicely over to ‘Dirty Soapbox’. If you want to know how these sounds are made, you can read my interview here. ‘The Truth Behind’ starts calmly. There are a few subtle changes in volume and tempo. In the minimalistic part, Dave knows how to hit me with his voice and piano playing. The creaking noises in the background that were added on purpose, is the start of an overwhelming sequel. The build-up towards the end is sublime.

There are a few short tracks on this CD, including ‘Right Back To The Start’ and ‘Statistic’. The latter is an instrumental track. The striking electronic sounds blend seamlessly with the whole. ‘State of Innocence’ gives me goose bumps. The high vocals form a beautiful melange with the rest. Again the layer over layer is perfectly balanced. ‘The Carnival of Modern Life’ has a fascinating but remarkable start. The rest of the track also runs separately. Some twists and turns are almost bizarre. But vocals, lyrics and music are now again in harmony. During this five-part track, there is a critical look at the ins and outs of contemporary society. Especially the sampling tends to an impressive end. The last The Grand Finale (Look At Yourself), is really a Grande Finale.

Most texts do not encourage you to sing along, but you have to think about it. Although you should be interested in these ‘philosophizing’ texts. But even if you do not let the lyrics get through to you, ‘Static’ is a fascinating album. Because all songs are interestingly built. Snares, strings and keys regularly melt so nicely that they can barely be separated. In addition, all kinds of special sounds have been added. This keeps you listening. You always hear new things. All this means that this album has to grow. Take your time for that, because this fantastic album lasts no less than 74 minutes.