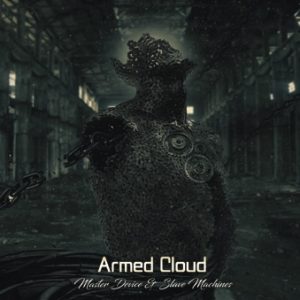 Armed Cloud is a symphonic metal band from Nijmegen (The Netherlands). They have already been active for seven or so years. ‘Master Device & Slave Machines’ is the follow-up to ‘Obsidian Desert’ (2015).

‘Save Yourself’ starts out with sampled noise, which sounds very spacy. Soon, a bit of metal is added. Daan Dekker has a very recognisable voice. The lyrics to the opening track are not very complicated. And yet, these men omit the clichés of the genre. Boris Suvee and his bass come through very well most of the time, which is even more so the case for guitar player Wouter van der Veen. The few moments of peace in the song are well done. This well-structured opening track has a sudden, but cool ending.

In ‘The Crack’, the dominant presence of the heavy guitars form a fine contrast with the higher tones of keyboardist Remco van der Veen. Again it is the awesome bass groove that captures your attention. Rico Noijen plays his drums very tightly, which really fits the rhythm, which is also very tight. Daan is now singing a bit more theatrical, which is in harmony with the song as a whole. The backing vocals and the odd scream are a nice addition. The ending is once again tight and sudden.

Daan sings a part of the lyrics to ‘Mobocracy’ in a fast rhythm. Unfortunately, the intelligibility suffers a little. The vocals and music conjure up a theatrical feel of warriors. The sound of the drums adds to that. There is a high scream. I’m waiting for what is coming next, but after a short instrumental piece, this song’s ending is unexpected upon first listening. After getting used to it, that feeling disappears. ‘Mirror Mirage’ ends, very appropriately, with the sound of a breaking mirror. This could’ve been done a little harder or grander. For example, by playing the sound in slow motion. The effect would have been more impressive and would have fit the music better.

The start to ‘Warhead’ is mysterious, like watching a film where something is about to happen. The music is tightly played and builds up. After that, the rhythm is like a machine gun. There is a restrained anger in Daan’s voice. Melody and rhythm contain both repetitions and changes. The fantastic guitar play really fits this. The beautiful change to piano lasts very shortly. Depair returns. There is a restless, but awesome piece of drumming. On the background, there is emotional screaming. The restlessness decreases and the music slowly dies away.

The calm start to ‘Dancing Spirit’ boasts soft plucking of strings. The sound of a string ensemble is there. The words Daan sings softly show that his mind is not calm. The words form a strong contrast to the tender sounds of the intro. A beautiful, but slow build up adds more speed and volume. Different changes follow each other up. Sometimes, the drums come to the foreground, less tight than usual. Lyrics and music are completely balanced and equally divided through the speakers. What a cool, epic track!

The lyrics on this album are easy to understand and therefore much more accessible than those of ‘Obsidian Desert’. Part of the album title ‘Master Device & Slave Machines’ can be found in the lyrics to ‘The Cycle’. The other part? The listener can search for it him/herself in the beautifully made booklet. Parts of the melodies and rhythms are complex, yet they are catchy. In short: ‘Master Device & Slave Machines’ is accessible and fascinating at the same time!