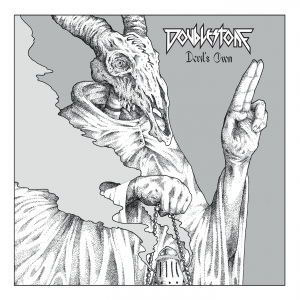 Originally formed as a power-duo in 2011 Doublestone are a trio of Danish rockers who unabashedly celebrate the almighty power of the Riff. Heavy on the Sabbath, and other 70’s Doom / Hard Rock icons, and infused with a bass-heavy stoner groove ‘Devil’s Own / Djævlens Egn’, Doublestone’s second full length release is a requiem for a gone-by era of Rock and Roll purity.

Presented in two parts, ‘Devil’s Own’ in English the other ‘Djævlens Egn’ in Danish, and chocked-full of indelible riffs, masterful song writing and Magickal lyrics that paint pictures of holy men, serpents and war, Doublestone have created the most quintessential hard rock album in recent memory.
Tracks like ‘War Machine’, ‘Man On The Hill’ and ‘Djævlens Egn’ are expertly crafted, no frill, slabs of 70’s style Heavy Metal replete with memorable riffs and smooth, driving basslines. But it is on the phenomenal title track ‘Devil’s Own’ that Doublestone truly shine.

Centred around a simple yet haunting acoustic melody. Stylistically this may be the most basic track on the album but it is mournful and evocative. With a succinct solo and beautifully layered vocals that carry the track to an almost defiant crescendo.

While listening to ‘Devil’s Own / Djævlens Egn’ I was struck by the maturity of the song writing and the straightforwardness of the approach. And the fact that this is only album number two in a career less than a decade old can only mean that Doublestone have ahead of them a bright and auspicious future.