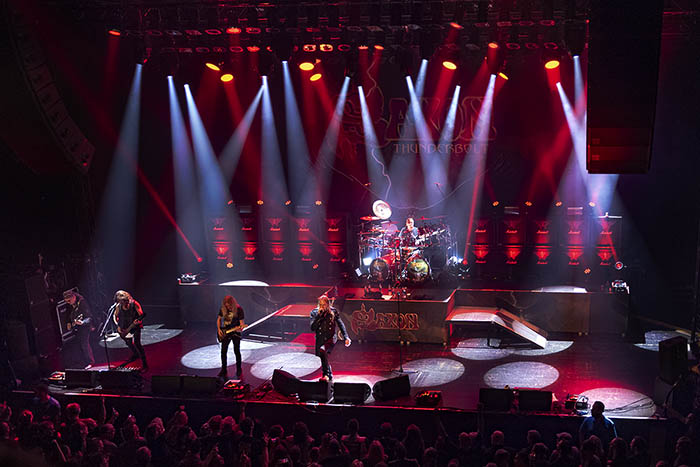 Saxon is one of the founders of the New Wave Of British Heavy Metal (NWOBHM). The band released the new album ‘Thunderbolt’ this year. What follows logically is a tour to promote this 22nd studio album of the band. The performance tuesday night in Tivoli Vredenburg is the last gig on the mainland of Europe. As a support, the band from South Yorkshire brings two other bands from England; Raven and FM. 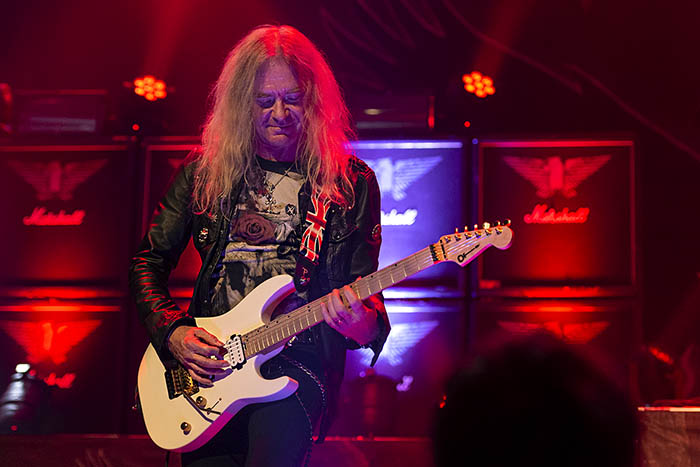 Raven is also a product of the NWOBHM. The band from Newcastle is started by the brothers John (vocals, bass guitar) and Mark Gallagher (guitar). They were especially successful in the beginning of the eighties thanks to their albums ‘Rock Until You Dro’, ‘Wiped Out’ and ‘All for One’. Their style of NWOBHM with a large portion of speed and thrash metal is striking during that period. After that it went not so good with their popularity and the band now mainly focuses on the success of the early years. 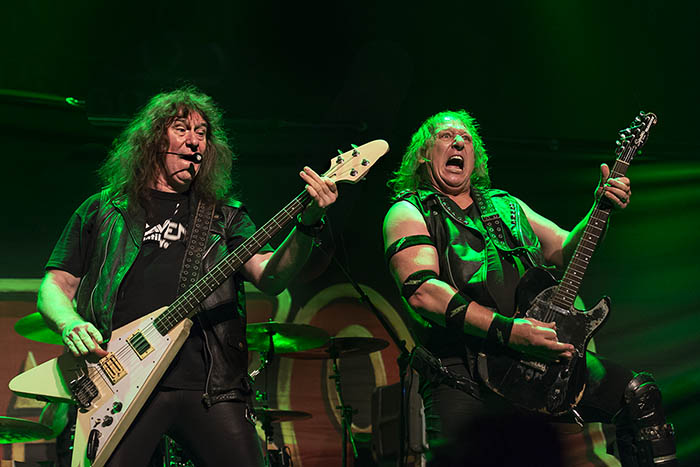 In the last decade, Raven released only two albums, ‘Walk through Fire’ and ‘ExtermiNation’. The opener tonight, ‘Destroy All Monsters’, is of the last album. Besides a few songs from the beginning period they also play a new song with the title ‘Top of the Mountain’. Musically nothing really new. Raven remains faithful to it’s own style and is especially notable for the drive and energy they put into their performance. 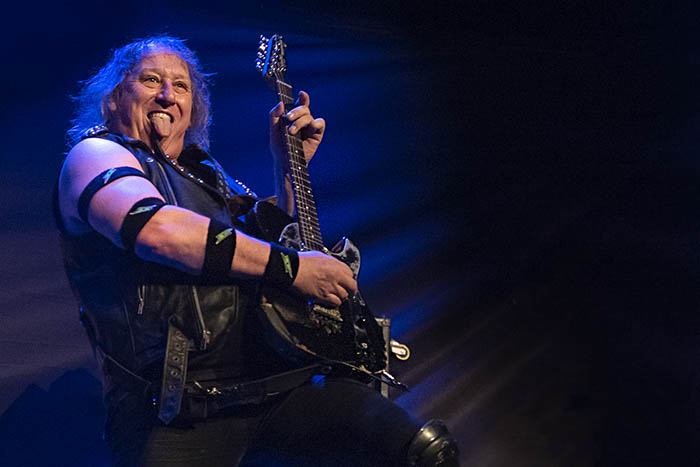 It will have been a bitter pill for the many Y&T fans, their favorite band had to cancel this tour. Singer-guitarist Dave Meniketti suffered a serious back injury and had to pass this tour on doctor’s advice. The English AOR band FM takes over their place this tour. FM is a very good melodic rock band. However, the problem is that between two genuine NWOBHM bands they are an odd one out. The band can hardly fascinate the majority of the heavy metal fans. 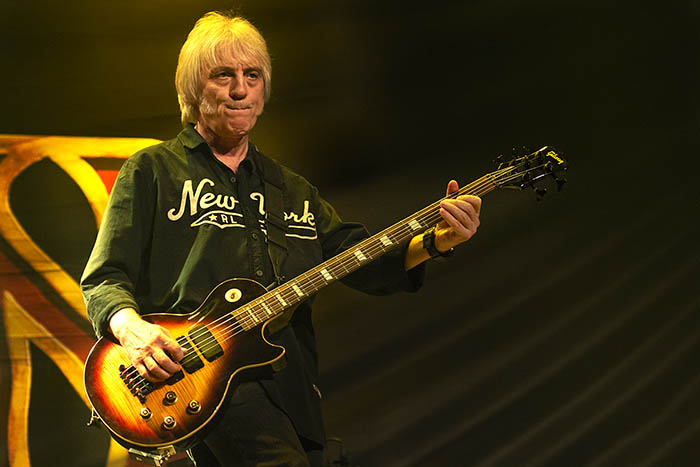 Under the guidance of the renowned singer Steve Overland, FM brings good listening to rock for three quarters of an hour. They start and end with a song from their latest album ‘Atomic Generation’ that was released last March. In between there are several older songs like ‘Tough It Out’ and ‘That Girl’. The band plays routinely and even when guitarist Jim Kirkpatrick gets a technical problem, it is hardly noticeable to the public. Given the music style it would have been better to have FM start tonight and let Raven play in between. 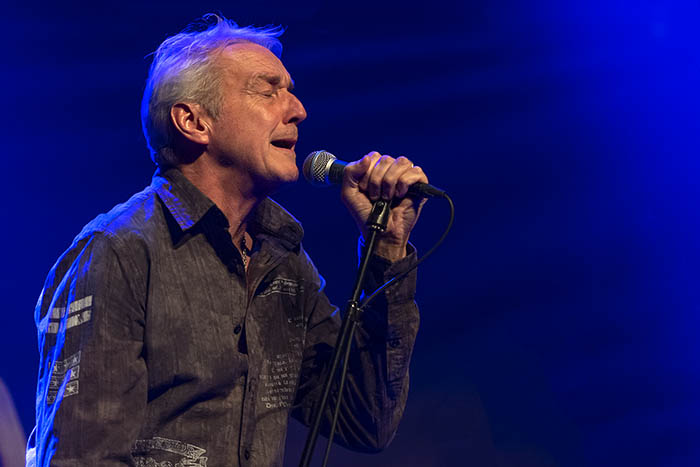 Saxon guarantees a portion of heavy metal. For almost forty years this oiled metal machine is running at full speed. Next year they will celebrate their 40th anniversary and singer Biff Byford promises the audience can count that they will come back to celebrate the joyful event. Besides Byford, guitarist Paul Quinn is also involved from the beginning. Also drummer Nigel Glockler dates from the beginning of the band. He joined in 1981 but has been away for a while. Since 2006 Glockler is again the man behind the drum kit at Saxon. Guitarist Doug Scarratt and bass player Nibbs Carter, both two decades band member, complete the line-up. 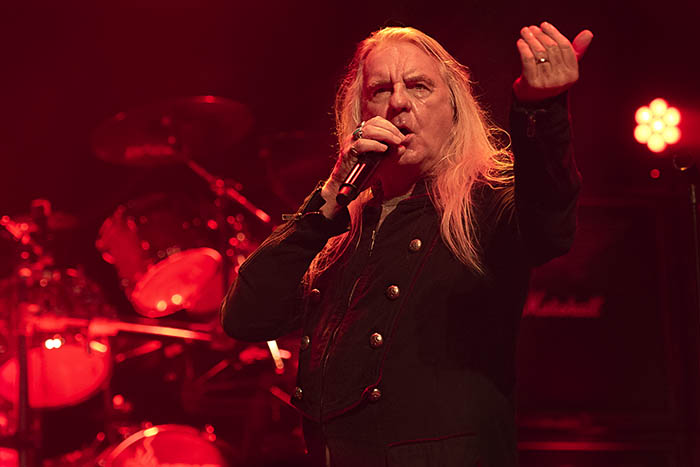 Tonight Saxon starts with a good first attention to their latest album ‘Thunderbolt’. With the title track, ‘Nosferatu (The Vampires Waltz)’ and ‘Predator’, that is clearly underlined in the first half hour. Biff also announces that it is still no time for ‘Wheels of Steel’, one of the biggest hits of the band. The singer is in good mood and shows so regularly during this evening, with the necessary English humor. He feels like in a circus in this venue and hasa good contact with the audience, both on the first rows and on the balcony. 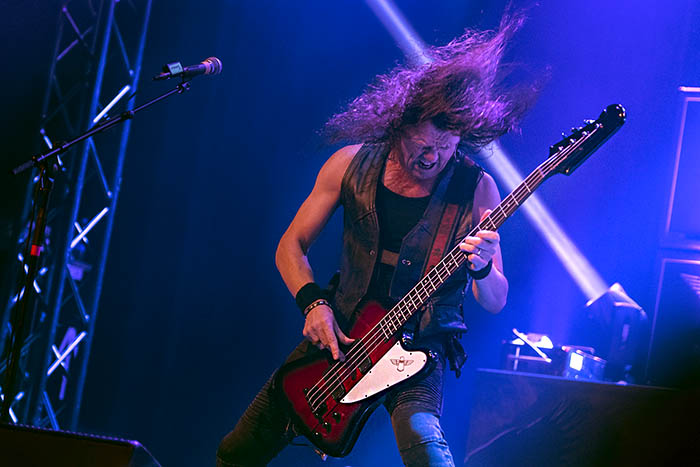 Saxon can draw from a large catalog of his own classic metal hits and so many favorites op the audience pass by, like ‘Motorcycle Man’, ‘Strong Arm of the Law’, ‘Dallas 1 PM’, ‘747 (Strangers in the Night)’ and ‘Princess of the Night’ to name a few. The fans sang every word, along with the band. With ‘They Played Rock and Roll’ Saxon also brings a tribute to Lemmy and Motörhead. This creates an exuberant metal party on a warm Tuesday evening in October. 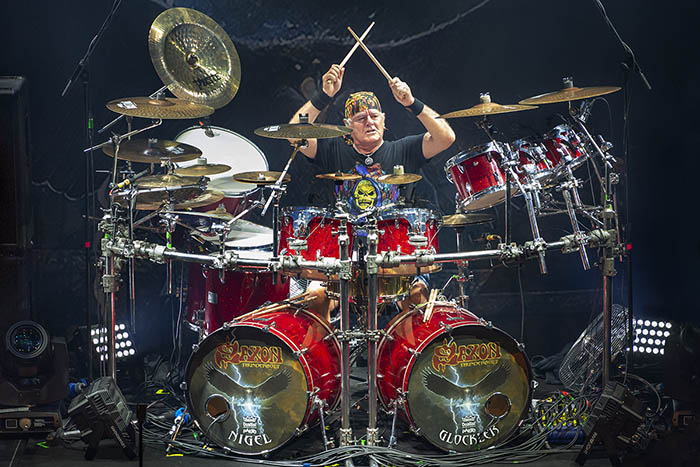 The roof almost sets fire in the encores. Saxon throws four of their biggest hits into the hall with ‘The Eagle Has Landed’, ‘Heavy Metal Thunder’, ‘Wheels of Steel’ and finally ‘Denim and Leather’. With the latter song, Biff lends a denim jacket from a fan for convenience to provide the battle song with a visual aspect. 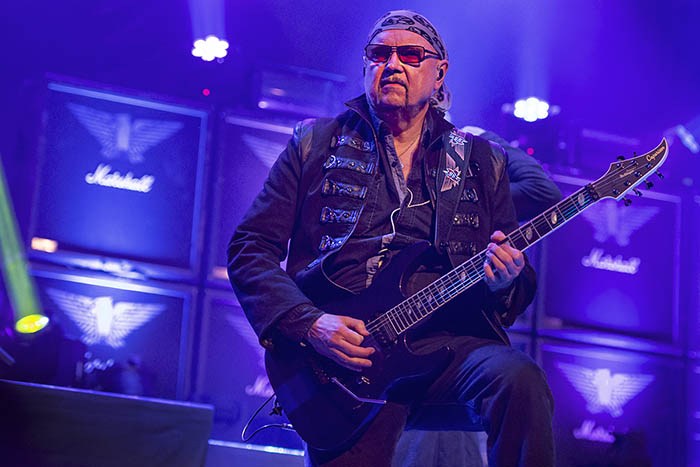