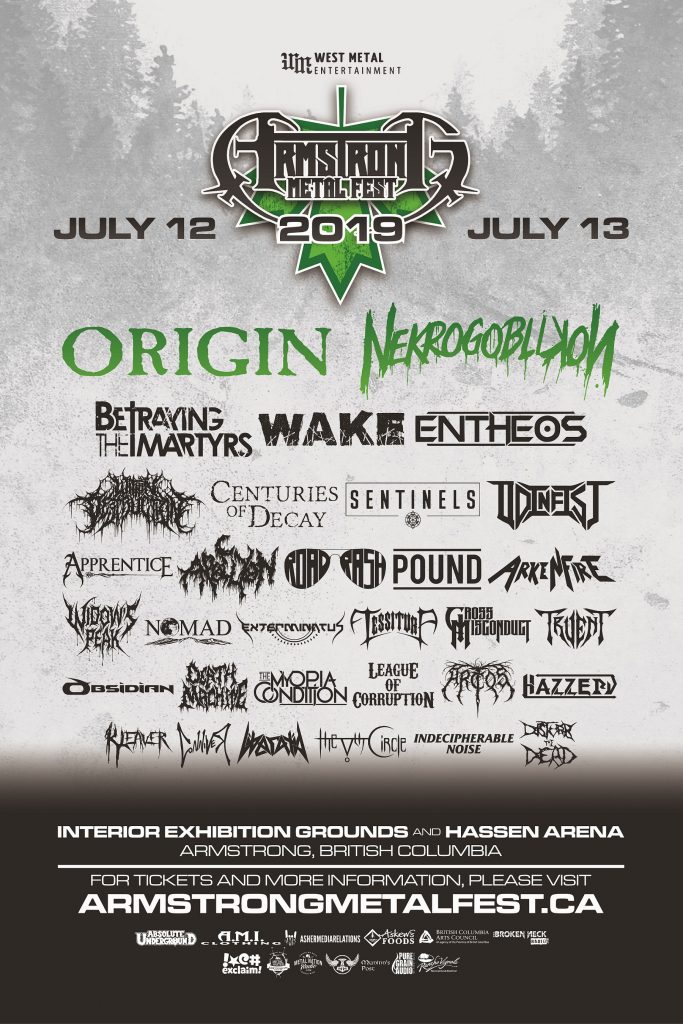 Western Canada’s Armstrong Metal Fest reveals its 2019 line-up for its 11th annual mountain moshpit taking place on July 12th and 13th at the Hassen Arena in Armstrong, BC. A gathering like no other in the Okanagan Valley, Armstrong Metal Fest brings forth a horde of metalheads for camping and headbanging over two days. This year’s line up features headliners Origin who will unleash onto the masses a full-blown sensory assault of tight, taut, and technical death metal amplified by flashes of grindcore and groove along with goblin tyrants Nekrogoblikon plus an onslaught of over 30 bands that includes Parisian extreme metallers Betraying the Martyrs, Wake, Entheos, Wacken Metal Battle Canada 2018 Champions Centuries of Decay and Slovenia’s Within Destruction.

“I’m super excited about our line-up this year, we’ve got some of my drumming heroes in Origin and Entheos, the super fun Nekrogoblikon, our first opportunity to have some bands from overseas in Betraying The Martyrs and Within Destruction, a few of our brothers from the states, and so many killer bands from around Western Canada. Our original dream of bringing the European metalfest feel to Canada is really taking shape, and I’m so grateful to still be a part of this.” comments Bretton Melanson, President of West Metal Entertainment, co-founder of AMF.