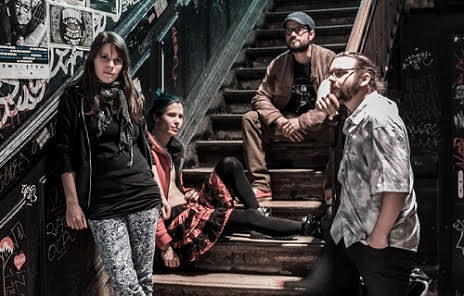 A few days ago and after having spent some to to work hard on it, Swiss instrumental rock/progressive/metal quartet The Kompressor Experiment finally released its debut full-length album called ’12’ for physical (limited handmade digifile) and digital formats.

The Kompressor Experiment is a quartet from Sion (Switzerland) which offers a blend of instrumental progressive rock, metal, stoner rock and post rock. The band adds to this genre-mix some innovative sounds and tries to push the traditional boundaries of rock music.

The musical side of this uncommon project is entwined with a strong visual identity. The band’s enclosed with cinematic esoteric visuals and adds to its shows some mesmerizing abstract video projections.

Having recorded an amateur demo in 2013 and played a dozen gigs around Switzerland eversince, The Kompressor Experiment gets into the DIY process of recording its first studio album called ‘DOUZE’ in 2016.