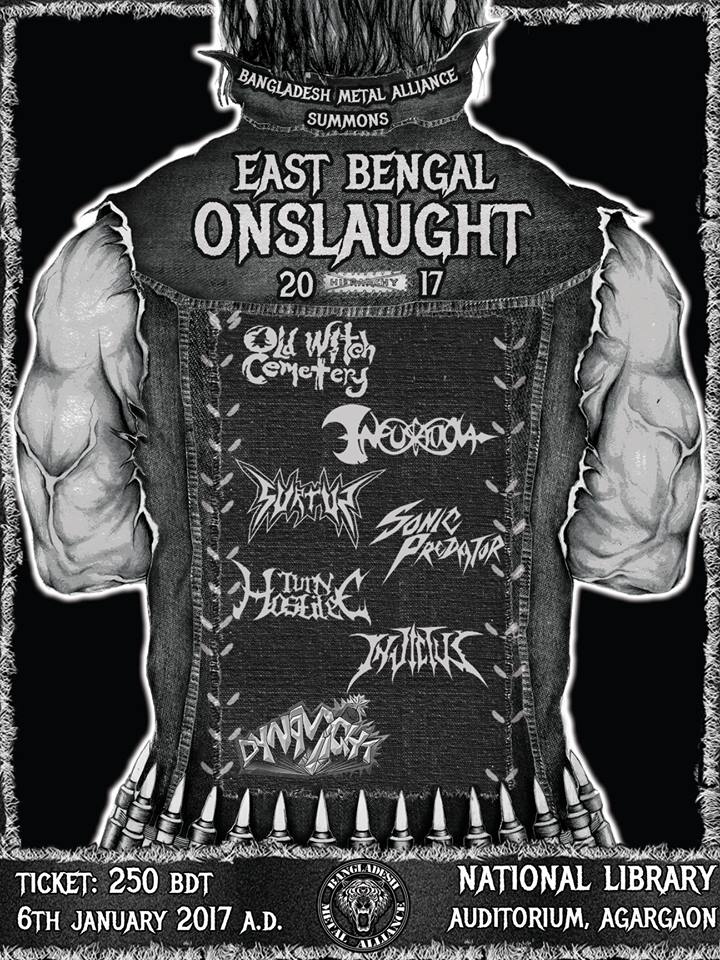 Metal gigs in Bangladesh are not rare, yet, one does not frequently witness metal gigs with good line-up (though the number has been increasing since last few years). It goes without saying that any metal gigs with captivating lineup brings no less joy than the celebration of any major festival among the dedicated metal music listeners of the country.

Previously, we clued you in on Dominion Through Obscurity, an underground extreme metal gig that took place last month in Dhaka, Bangladesh. Being the official partner of that event, we will be returning to you with an in-depth live report of that event within a few days.

The first week of the year 2017 will see the happening of “East Bengal Onslaught – 2017”, another jaw-dropping metal gig at the same venue but with a different line up. The gig is not having any headliner and hierarchical slotting order, and to be honest I can’t even remember if I have ever seen the combination of these two aspects in any other underground metal gigs of Bangladesh. And the line-up consists of Seven of the most promising young bands of the country who will be enchanting the audiences with their top-notch original music; it is a definite wow factor, isn’t it? The organizer “Bangladesh Metal Alliance” has undoubtedly been playing an important role to reinforce the underground metal scene of the country since 2013 and kudos to their such initiative to highlight these newly emerged talented acts.

We have had a short conversation with Nabil, one of the organizers.

RMZ: Newly formed acts are quite overlooked by the organizers despite having potential. And when you are organizing a gig only with these new promising acts, excluding the big guns of the scene, how challenging the overall situation is?

Nabil: It’s a big challenge, a ballsy gamble from an organizer’s point of view. Because conventionally in a scene like ours, the headliners and the supporting acts draw the major attention from the crowd. With them, these young bands get to share some bits of the floodlight. This is how it has always been. Going against the convention is never easy, be it any aspect of the society, art, culture etc. So, when we were planning this gig we had the downsides in mind and we still wanted to pursue this gig. Promoting young bands has always been one of our main priorities. After our list gig “Scream Bloody Death”, we had feeling that we have successfully pulled off something different. We have the ground to do something different for the 2nd time.

RMZ: Do you think that such kinda initiative will help people to change their typical mindset of only craving for the gigs of the known acts and ignoring the new bands?

Nabil: Well I definitely think this gig will bring about a small inception of the change of mindset. But the initiation needs to be continued by other organizers too. The change cannot be brought by only one organization and it won’t happen overnight. May be our step can encourage other promoters. The process has to start anyhow.

Dynamight: A traditional heavy metal that has already amazed the listeners with the debut gig and a few rehearsal videos.

Invictus: The hard-hearted thrash metal quartet was the runner up of Battle of The Bands 2014 (presented by Get Amped and Insanity) and they have performed in numerous gigs.

Turn Hostile: The fierce sounding thrashers released their debut EP last year, and their music is surely capable of turning the venue into a warfare.

Sonic Predator: The band fronted by the fan-favorite Abir Mahmud of Enmachined has showcased the bonafide feel of traditional heavy metal sound among the crowds. When the crowds keep chanting the band’s name since their first show, one can probably feel the aggression of these predators.

Surtur: Probably the most accomplished band of this bill. Self-released EP “Descendant of Time” was later re-released by two foreign labels, and the band is currently signed with Witches Brew, a prominent name in the underground thrash/heavy metal scene. With their ripping, savage thrash metal music, Surtur has gained appraisal in various foreign metal medias and last month, they toured in Kolkata, India.

Infuscation: Infuscation has not released any records so far, but their innovative yet destructive song-structure is giving us the alarm that they are on the way to become one of the strongest extreme metal acts of the sub-continent.

Old Witch Cemetery: The entire Bangladeshi metal scene was lacking a proper Traditional Doom Metal act and this band has finally ended that scarcity. With elegantly written horror themed lyric, heavy riffs and outstandingly cleanly sung vocals, the band has brought Doom over Bengal. All copies of their demo release was sold out during the launching date.