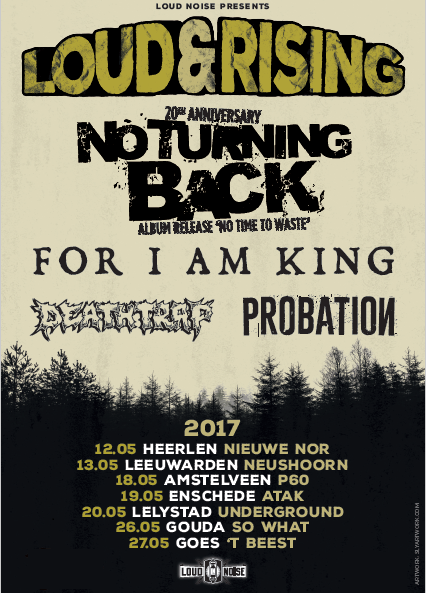 Out of numerous submissions, two bands were chosen to join the new Loud & Rising tour of the Dutch booking agency Loud Noise. The hardcore band Deathtrap and the metal/hardcore band Probation will join the hardcore act No Turning Back and Dutch metal outfit For I Am King on their Dutch tour in May and are now a part of the Loud Noise roster.

Deathtrap, hailing from Rotterdam, started out in 2013. In the past four years, the band has perfected their sound and are ready to bring their own unique groovy mix of hardcore, metal and Southern rock to the masses.

You know you are doing something right when you’ve been around for about a year and you’re already being selected to embark on a tour with a household hardcore name. This is the case with Probation from Limburg, who only started in 2016 and convinced the Loud Noise team with their sludgy metal/hardcore sound.

Deathtrap and Probation will join No Turning Back on tour, who are celebrating their 20th anniversary this year and who are about to release a new record. The upcoming Dutch metal outfit For I Am King also embark on this tour as support. Check out the tourdates on the poster and be sure to catch this package on tour!