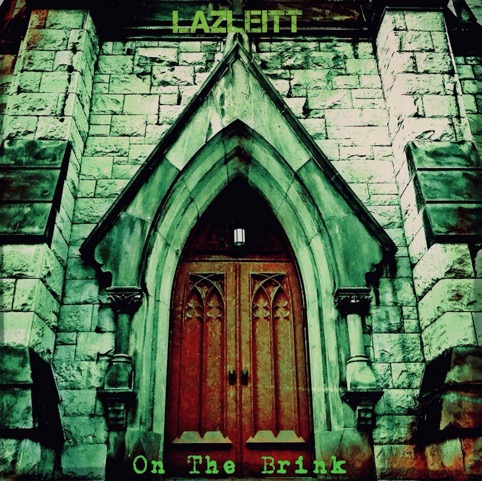 At a young age, Alex Lazcano (from Washington DC) started playing music, and became a multi-instrumentalist. He is both a classical musician and rocker. Lazleitt is the name of his new progressive project. The debut album is called ‘On the Brink’. Comprised of 13 movements that you hear continuously, so that it plays like one track (over 37 minutes). To explain the essence of Lazleitt as well as possible, I will tell you something about each track.

The spherical music of ‘Intro: The Doorway’ hooks you immediately. The sound of the strings is subtle. There are symphonic elements, for example, timpani. The layers over and after each other are nicely divided. Alex delivers the words with a clear pronunciation. Also, on the vocals you hear several layers over each other. The melody of the song and the music are dreamy. The music is in tune with the words Alex sings. You clearly hear the transition to ‘Tangential Wisdom’. Now the rocking section kicks in out of the blue. The staccato-played rhythm and the melody go hand-in-hand here. During the first sentences Alex sings staccato, his voice resembles Neal Morse’s.

After this track fades out, the transition into ‘The First Trail’ is not entirely smooth. But the transition into ‘The Flame (On The Brink)’ is seamless. There is hope in the words. The color of the song and music is slightly sweet. During the instrumental interlude you hear various details, such as a rattling sound. The track speeds up and we arrive at ‘Beyond The Door There Is No Pain’. Again, there is super immersive guitar playing. This, together with the bass line, counteracts the smooth, polished sound. In such a way that the sweetness is never overpowering. The changes in rhythm and melody are fantastically integrated. Again, guitar playing is ear-candy, aided by keys and drums.

Suddenly there comes a peaceful musical passage, landing onto ‘The Second Flame’. A fabulous musical twist makes an appearance here. Slowly the rocking section builds up, and again everything is in harmony. In ‘Spinning Clocks’ the hi-hat cymbals are played swiftly, but lightly. A moment later a flute whirls through. Then ‘The Eighth Paradigm’ starts with a multi-layered acoustic guitar part. Pace and volume increase slightly as more instruments are added. You always hear new things. The rocking tempo and volume continue to rise.

You can hear the transition to ‘The Riddle’. Here there is a beautiful rest worked in. The layered vocals in ‘Parallel Dreams’ form a beautiful, and slightly sweet blend. Alex sings slightly theatrically in ‘The Second Trail’. This short, calm section flows beautifully into the instrumental ‘Through The Gates Of Life’. There is some unrest. Finally, we sail into calmer waters for ‘Finale: Memories Of A Battle’. The staccato drums sound like a march, with a powerful sound. Again, there is fantastic guitar playing. The track is clearly coming to an end: a beautiful build-up to a staccato finale.

The album asserts that you have to dare to come out of your comfort zone to be able to follow your dreams. The last tracks give off an atmosphere of being successful / of conquering something. In short “The American Dream”. Nevertheless, the words can be interpreted in several ways. Regularly, Alex’s voice has common ground with Neal Morse. There are countless changes in rhythm and melody. Moreover, ‘sweet’ and rocking parts alternate. Furthermore, various symphonic elements are interwoven. Vocals and music are constantly in balance. Conclusion: newcomer Lazleitt has established itself clearly on the map. (87/100) (Own Production)

Tracklist – On the Brink